Skip to Content
Home Interview We Want You 2018: On Tour with Mad Clown, San E and Sobae

Embarking on a 19-show city in a month, South Korean rappers Mad Clown and San E take on the longest Korean hip hop tours in the US thus far, along with R&B singer Sobae and DJ Juice. To that, San E lets out a sharp trill and remarks, “Making history! All that in one month. That feels like a lot. It just kind of happened. It’s been a whole different experience.”

We chatted in Oakland, their 13th stop on the tour, looking back at how the tour’s been going. “Honestly, I can’t pick a favorite city. They’re all different venues with different vibes. Everybody’s crazy but in different ways too,” San E said. “The energy was consistently amazing. If I had to pick top two so far, Tampa and Cleveland. I just feel like the crowd was extra passionate,” Sobae added.

Although the headliners are from two different labels, Mad Clown and San E enjoy finding opportunities to collaborate. San E shared, “When it’s time to make music, it’s fun to get together. Now that we’re on tour, we sleep together, eat together, do shows together. We’ve gotten to know each other on a deeper level.” Naturally, we had to ask what they learned. San E eagerly responded, “Uhh… Mad Clown is weird. He’s a really free man. Most people touring for a month would think to pack a lot of stuff, right? He just packed two t-shirts, a pair of pants and a pair of shoes.” He added, “Oh yeah, he always carries around this plastic bag too,” which Mad Clown actually had set on the countertop right beside him.

Turns out this plastic bag is a must-have item on this tour for Mad Clown. Sobae clarified, “He actually has a backpack, but he loves this plastic bag. He says it provides a sense of security.” Mad Clown insisted that it’s really convenient. San E admitted he didn’t even know what was in the rapper’s bag. Before we knew it, our conversation got derailed and turned into a “what’s in your (plastic) bag?” session. Pulling each item out of his bag, Mad Clown listed, “I have my glasses, my other glasses, my PSP, my headphones, my beanie… (there’s more.)” In short, we think his backpack might just be a decoy. (Wait, Mad Clown’s Instagram post pretty much proves it.) 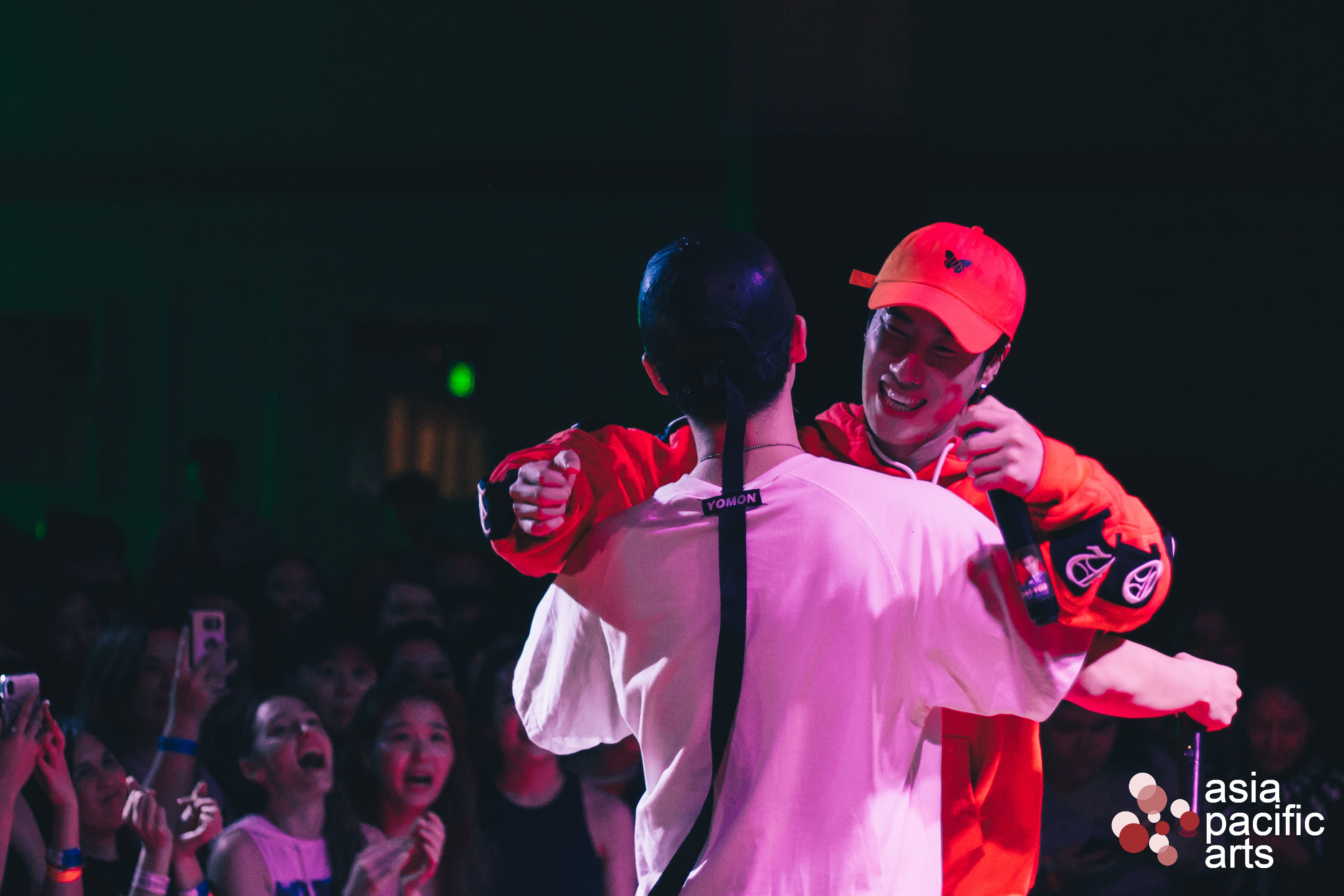 Back to the interview. Actually, we take it way back to when San E and Mad Clown met. They don’t exactly remember how they first met, but they shared their first impressions. San E recalled, “Mad Clown is… I remember thinking he was very cute-looking. [Mad Clown laughs] Look at him. He’s really modest and shy. But if you listen to his lyrics and how he spits, he becomes a totally different person. When he takes the stage, people go crazy.” To finish it off, San E leaned over to Mad Clown and cheekily said, “Go ahead. I said something good about you.” In response, Mad Clown described his first impression of San E as a skilled rapper who appeared out of nowhere on the scene: “His music was shocking. He came onto the scene and was dissing a famous rapper. People went crazy over that song.”

The two first collaborated in 2015 on “Sour Grapes,” a flirtatious and witty rap track, and they teamed up again most recently for “Butterfly.” San E explained, “The Korean title actually translates to ‘You, Me and Yellow (너랑나랑노랑)’ because it’s the spring season. You know, winter is long and cold. When spring comes, the weather’s good and everybody wants to just go out and have a good time. Mad Clown came up with it.” “We wanted the whole mood to be upbeat like spring. I thought comparing a girl with a butterfly would go well with that spring feel,” Mad Clown added.

As for what’s next after the tour, San E plans to spend a month in Atlanta with his family and Mad Clown will spend an extra week in the States with no set plans other than trying to eat as much pho as possible. If fans are left craving for more after the tour, they won’t leave you hanging for long. Fans can look forward to some brand new solo music from each artist, as they aim to release some fresh material by the end of the year.

Check out our photos below from the Oakland show below!