2017 has been a wild year for K.A.R.D., as they’ve been busy winning the hearts of fans all over the world with their catchy music. Prior to their official debut, the group successfully held tours in the U.S. and South America, which is a major first in K-pop. After making their official debut with their first mini album “Hola Hola” in July, the group embarked on a whole new slew of tours, performing in Europe, South America and the U.S. San Francisco marks the final stop of their U.S. tour and the co-ed group was greeted by a full house at the Warfield.

Opening the show with the English version of “Don’t Recall,” fans jumped to their feet to sing and dance along with the group. Dressed in black with rhinestones lining their outfits, K.A.R.D dazzled the crowd with their signature upbeat music and grooving choreography. When performing their first ever released song “Oh Nana,” fans’ excitement kicked up another notch, as this was the song that not only introduced K.A.R.D to the world, but put them in the spotlight. 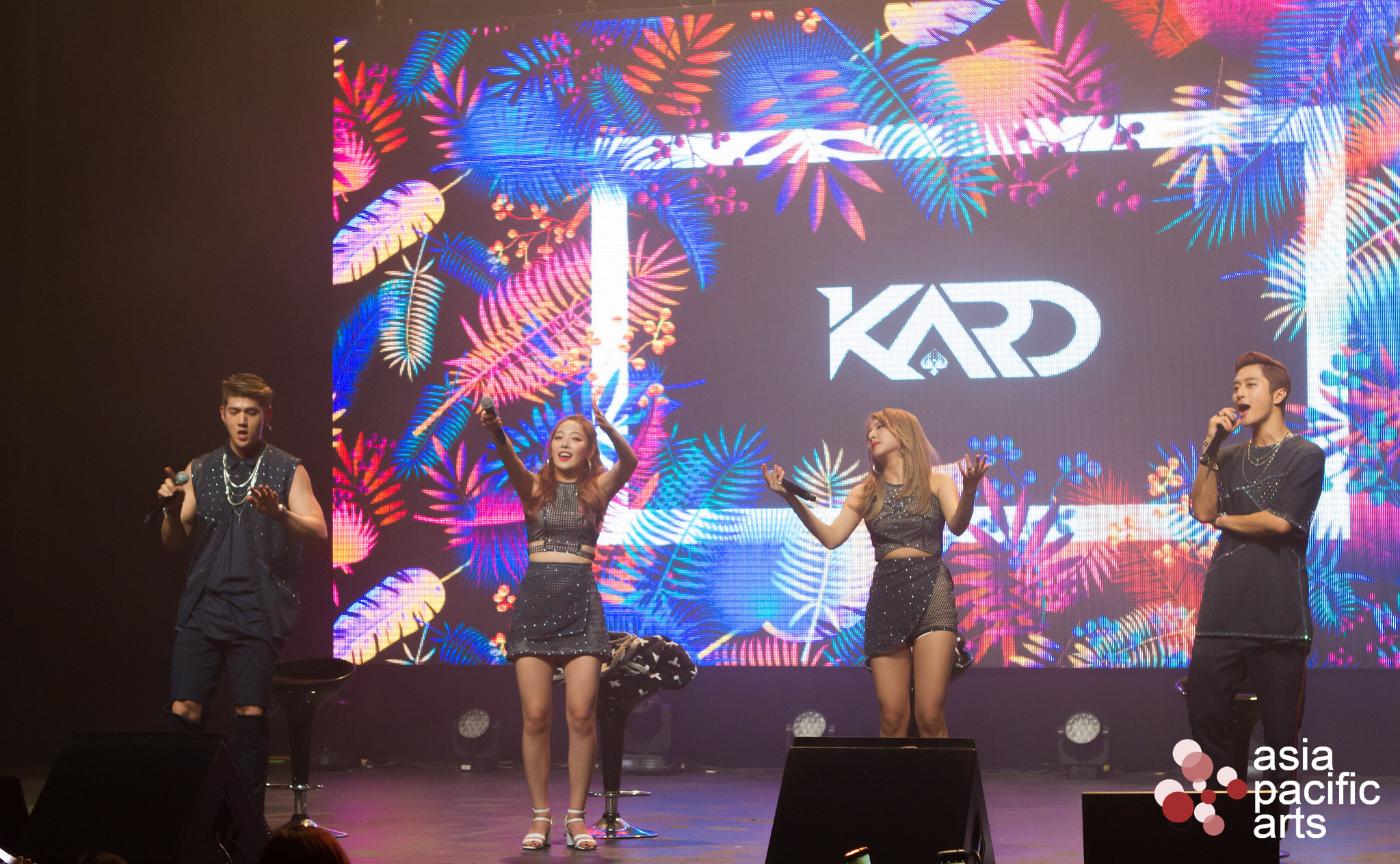 Breaking into a quick Q&A session, the members shared some memories while on tour and what they did while in the Bay Area. Most notably, J.seph and Somin went to Boiling Crab, which really should be a more popular thing to do when overseas artists visit the area. Getting back into the music, K.A.R.D dived into a set of covers including Eminem’s “Monster” and Ariana Grande’s “Side to Side.” Though the group is known for their moombahton-style music, the cover that stood out the most was female members’ Somin and Jiwoo’s rendition of Bruno Mars’ “Verace on the Floor.” The performance allowed the members to let their voices shine and proved that R&B would be great genre for the group to explore when making new music.

The highlight of the night was the fan engagement portion, in which four fans were pre-selected to roll a dice and win a special gift from their favorite member. The dice-rolling had the crowd on edge, eager to see what the lucky fans would win. Somin was selected to serenade a fan and while singing “Can’t Take My Eyes Off You,” the fan couldn’t help but cover his face shyly as he listened attentively. Meanwhile, Jiwoo recorded a gentle and angry wakeup call for a fan, so he could switch between the two. J.seph took a selfie with a fan and BM got down on one knee to present a signed album to a fan. Loudly screaming, the audience watched on both in glee and envy.

K.A.R.D took the stage once again to finish off the show with their latest tracks “Rumor” and “Hola Hola.” The crowd called for an encore and the group bounded back onto the stage to perform the Korean version of “Don’t Recall” and “Living Good.” After taking a photo with the audience, K.A.R.D said their farewells to the audience, who were reluctant to let them go. Despite only having six songs to their name, it’s impressive how the group has developed such a loyal fanbase with attendees having flown in from various U.S. cities and even other countries. Embarking on a path unlike any other K-pop group, it’s exciting to see where K.A.R.D will go from here.

Check out our photos from their concert below!