Set to return to television for its 13th season on September 27, Criminal Minds welcomes a new agent to the show. After the IRT (International Response Team) dissolves, agent Matthew Simmons, played by Daniel Henney, is contacted by the BAU (Behavioral Analysis Unit) for help on a mission to rescue an abducted member of the team. APA catches up with him Daniel Henney on playing Agent Simmons, joining Criminal Minds and his future plans.

APA: You’re coming from Criminal Minds: Beyond Borders to Criminal Minds in the new season. How will you be joining the storyline? Can you elaborate?

I get a call from the BAU, our team, at Criminal Minds: Beyond Borders, the IRT, was recently taken apart, disbanded. Because of an internal issue that we thought had been resolved, but apparently it was not. So I get a call from Penelope Garcia, played by Kirsten Vangness. She needs my help, at the end of the season last year, the Criminal Minds team, the BAU, had a huge event go down. They were in the midst of chasing Mr. Scratch. A car accident took place and that’s where we ended Season 12. And now in the beginning of Season 13, we are coming back into that same moment. Kirsten’s character is by herself in the office and she’s dealing with all the chaos. She calls Simmons to help her. He jumps on the case with her and heads out to the scene of the crime. He helps to balance all of the emotions, everything that’s taken place in the field.

APA: What can you tell us about your role on Criminal Minds? What’s new that you’ll be bringing to the team?

Well, I think that in terms of the existing team, I’m bringing another guy that’s experienced in the field. Simmons is a very interesting character. When I look at him, he’s a family man. Which I think is gonna be great for the BAU. He’s very much in love with his wife. He has 4 beautiful children. He does everything for his family. He’s an all-American guy, a guy’s guy. And I think that’s really gonna be good for the team. Not that Rossi’s character is not the same way, cause he is. But Simmons has that younger energy and it’s nice because a lot of times in these shows when you have the younger field guy, the tactical guy, they have some sort of emotional disconnect. Whether it’s PTSD their dealing with or their drinking, or they’re in between relationships, you never really know with these guys. And Simmons is not that, he’s very grounded. He’s dependable. He’s a shoulder to cry on for Kirsten’s character, Garcia. And I think that’s gonna be nice for the viewers to see, they can really depend on Simmons, he’s a very strong character and he’s gonna add another very strong leg for the team to stand on.

APA: You’ve played Matthew Simmons for a while and have had the opportunity to explore his identity and background as a biracial Asian American. How was his character written? Was he written this way prior to you being casted or did you play a role in influencing his story?

You know it’s hard to answer that question. When I sat down with Erica Messer, for Criminal Minds: Beyond Borders, the character was nothing more than a name that appeared on an audition sheet. I don’t know how much they had in mind for Simmons at the time. But when I joined on, as it always happens, the characters become much more full, full of life, full of color, full of everything. I’d like to think that we played a role in all of that. Simmons being biracial has really added an amazing element to this character for me. It’s not usual, it’s not normal for an Asian American actor to be able to play a role like Simmons where he’s the quintessential American. He’s the guy the viewers need to depend on, he’s a family man, he embodies what you want in a special agent, a tactical guy. And I don’t think that that responsibility has been given to an Asian American actor in a long time. So I’m very proud to play Simmons. I was very proud of the episode, “Pretty Like Me” last season on Criminal Minds: Beyond Borders where he was able to track down his Grandmother. So it’s been a very wonderful experience for me and I know the Korean audiences have really enjoyed following it. I don’t know if that answers your question, but it’s been a very fulfilling experience and I hope it continues.

APA: Matthew is a multifaceted character, in that not only does he have the brains of a talented and insightful profiler, but also the brawns of a military veteran. To top it all off, he has to balance the challenges of his intense job with his family life. How do you get into character to play such a complex person?

Well the writing is very good, so that helps. And the actors around me are really amazing. Kelly Frye who plays my wife is as amazing as Krissy Simmons. She’s incredibly giving, she’s easy to work with. When you’re on a show that deals primarily with hunting the bad guys and exposition dialogue and dissecting crime scenes and very heavy material. You don’t get a lot of time for the family moments, the family scenes. And when you do, it’s really nice to have an actress who makes it easy for you to do that. To get the energy to come across, the love to come across on screen in just a few scenes per year, it’s very difficult. I tip my hat to her, she’s really incredible. The producers, the writers, they really make it easy for me to just go and do my job. So, I really can’t take credit for that, it’s all them. I get ready the same way I get ready every day. I go to work, I prepare as much as I can. And I just hope that I’m doing my job to the best of my ability. 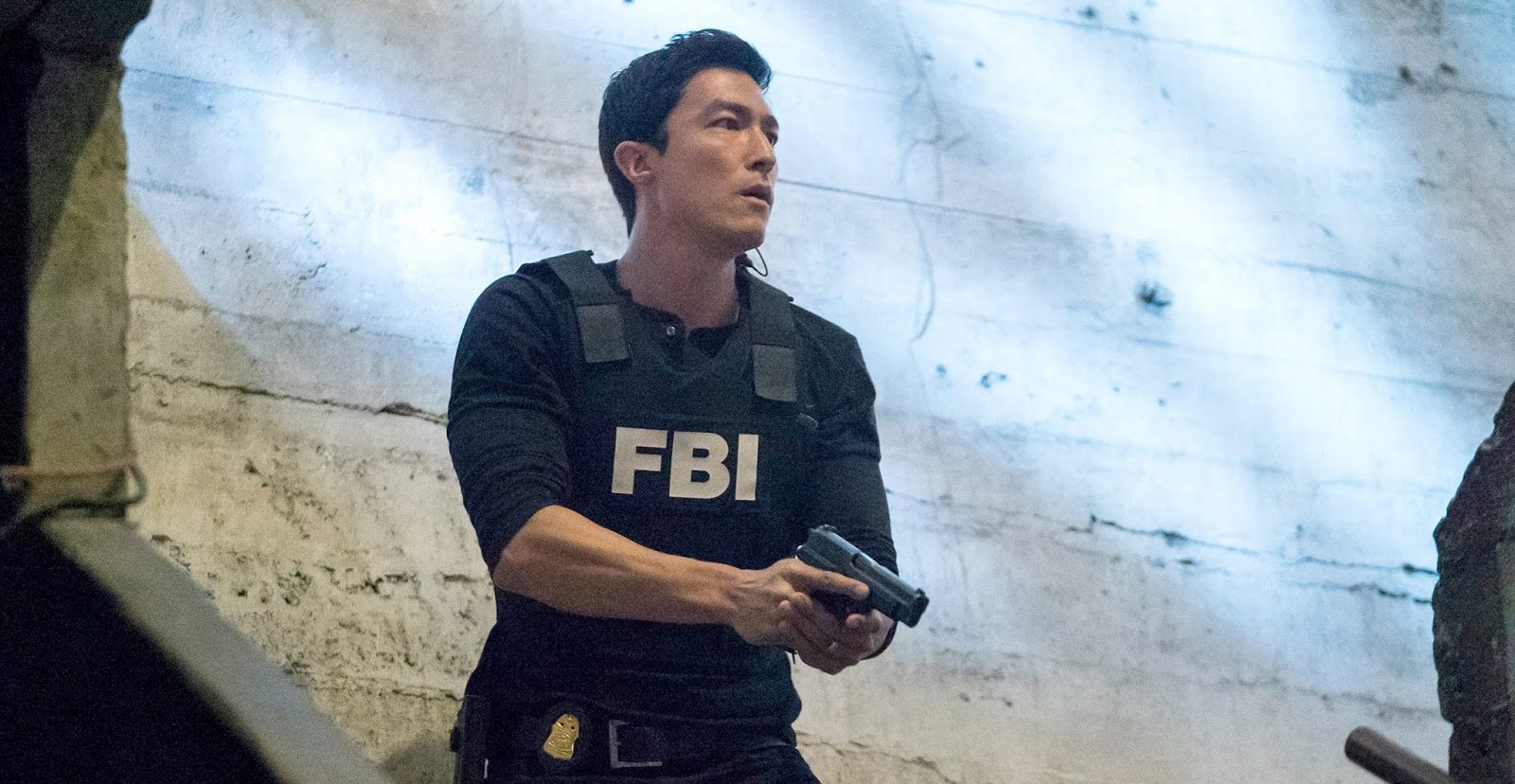 APA: How closely do you relate to your character? What similarities/differences do you see?

Well, I mean being from Michigan, we’re very close. We have a lot of Veterans where we come from. The military has a big presence in Michigan. My father was in the Navy in Vietnam. My best friends dad was in Vietnam. There is significant connective tissue between us and many veterans where we come from. Michigan people are very proud Americans. So I think that there’s a huge similarity there between Simmons and I. So when I was getting ready to play Matt, I spent some time talking to my father. Just about his mentality, his train of thought, in certain situations. His stoicism, just the way he approaches different situations in life. I don’t have a family myself personally. But I’m head over heels in love with my Golden Retriever. So I try to apply that to my children as Matt. So definitely more similarities than differences.

APA: I believe you’re currently filming for the new season now. Can you tell us what a typical day on set is like for you?

A typical day for me is waking up by 5am, in the gym by 5;30am. Usually on the road by 6:45/7am. On set, breakfast, and heading to rehearsal. We shoot very fast, it’s a very well-oiled machine. The actors get along incredibly well. They’ve welcomed me so much. A lot of jokes, A LOT of jokes. A lot of great acting, hopefully some from me. Everything runs smooth, my days of work are full of joy. I’m usually done before I realize it because it goes by so fast. It’s usually a 13 hour day or so. Not a lot of trailer time because the actors get along so well, we’re usually spending it together. So it’s just an absolute joy to go to work.

APA: It seems that as of lately you’ve been playing quite a few agent roles in crime-genre shows. Is this your preferred role/genre? Are there other types of roles that you’re interested in playing in the future? What about other genres?

I’m absolutely interested in everything. I’ve been lucky to have roles like this come my way. I’ve never been one of those actors who thinks it’s bad to play one role over and over. It’s exciting, I count myself lucky to be able to do this. I’ve played many agent roles, but they’ve all been very different. Simmons has been by far the deepest character, most interesting, most grounded character, most exciting character I’ve ever played. And the longest, this is going on my 4th year now. But of course there’s other stuff I wanna do. And having a presence over in Korea has given me the opportunity to explore different roles, different characters. I’m a very different actor over in Korea than I am here in the states so we are always trying to get projects going over there. I just filmed a movie over there, that I can’t really talk about much. I got to play a hedge fund broker which was really cool and I’m excited about that. And there’s a lot of stuff in the pipeline, the future. I’m always open, always hustling, I’m game for anything.

APA: It’s been a while, but your international fans would like to know do you have any plans for activities in Korea or internationally soon, whether it be acting, variety shows or something else? Your fans were very happy to have seen you on “I Live Alone (나 혼자 산다)” at the tail end of last year.

Yeah, we are always looking for something in Korea. Unfortunately, with the Criminal Minds schedule, it’s hard for me to get away for any lengthy period of time. But I do go to Korea once a month to fulfill obligations. We are looking at TV shows, we’re looking at dramas. I just finished a small part in a movie like I just said. Very interested in doing something big in Korea in the future. And I’m very aware that the fans are excited. I feel very blessed and tell all the fans to stay tuned.

APA: Lastly, can you share with us what your plans are for the rest of the year?

Working my butt off on Criminal Minds, making sure this is the best Matt Simmons season ever. I wanna be present every day. Be alert and awake. And give the fans what they deserve. I think that season 13 is very important. I wanna ensure that we have a really good shot at going to season 14. I know they had a rocky season last year with some of the stuff that went down. So I think this is the season of coming together, supporting each other. Just strong storytelling and strong acting. Great execution. I’m just here to contribute any way I can to make this show as good as it can be. Just grinding it out until Christmas and then home to Michigan to sit around that fireplace and open presents.