For his second world tour White Night, Taeyang expanded beyond Asia and included a North American leg, comprised of nine shows in eight cities. Nearing the end of his North American tour, Taeyang performed at City National Civic in San Jose, an intimate venue compared to the enormous stadiums the superstar typically performs at in Asia. Due to electrical complications and technical difficulties, Taeyang began his soundcheck late which in turn, pushed back the rest of the show about 30 minutes. Despite the delay, the crowd’s excitement was palpable as the venue filled up with many attendees dressed in all white and even some in wedding dresses, in reference to the singer’s hit song “Wedding Dress.”

As the lights began to dim and music played, the crowd frantically waved their Big Bang crown light sticks and erupted in cheers when the stage screen split apart to reveal Taeyang. Kicking off the show with upbeat dance tracks “Ringa Linga” and “Body,” he energized the audience who have been waiting hours for him. He moved into “Wake Me Up,” a new song from his latest album White Night which focuses more on his smooth vocals accompanied by hazy synths.

Then jumping back in his discography, Taeyang performed his first solo track “Look Only At Me,” setting off the crowd in screams and igniting a wave of nostalgia. Unfortunately during the performance, Taeyang was hit by his microphone and had a nosebleed. Unfazed, Taeyang kept performing as if nothing had happened, despite the noticeable trickle of blood on his upper lip. Although he attempted to reassure attendees that he was fine, it seemed that for the rest of the show, he took longer breaks between songs while the crew mopped the stage. With how confidently and energetically he continued to perform, one wouldn’t have guessed that he just sustained a facial injury and might possibly be minorly bleeding throughout the rest of the concert. Having debuted 11 years ago, Taeyang’s experience definitely showed as he masterfully pushed forward and put on a memorable show.

Titled after Taeyang’s latest album White Night, the tour focused more on showcasing the latest the singer has to offer. With this release, Taeyang explored a more mature sound that featured smoother melodies, rather than dance tracks. When singing “Naked,” the crowd chanted the addictive chorus “I want you naked,” which echoed throughout the venue. Grooving along to the chill track “Ride,” Taeyang felt right at home on stage, just naturally moving along to the music.

Taeyang also made sure to deliver fan favorites like hitting the crowd with “I Need a Girl” and “Wedding Dress.” As soon as he launched into the songs, fans instantly screamed in recognition and sang along so fervently that it was like Taeyang didn’t need a backing track at all. The standout performance of the night was “Love You to Death.” Much of the show was performed in blue/purple lighting, but for this song Taeyang took to the stage basked in red lighting. Standing downstage center, Taeyang passionately sang with a mic stand, while wind steadily blew away swirling smoke. 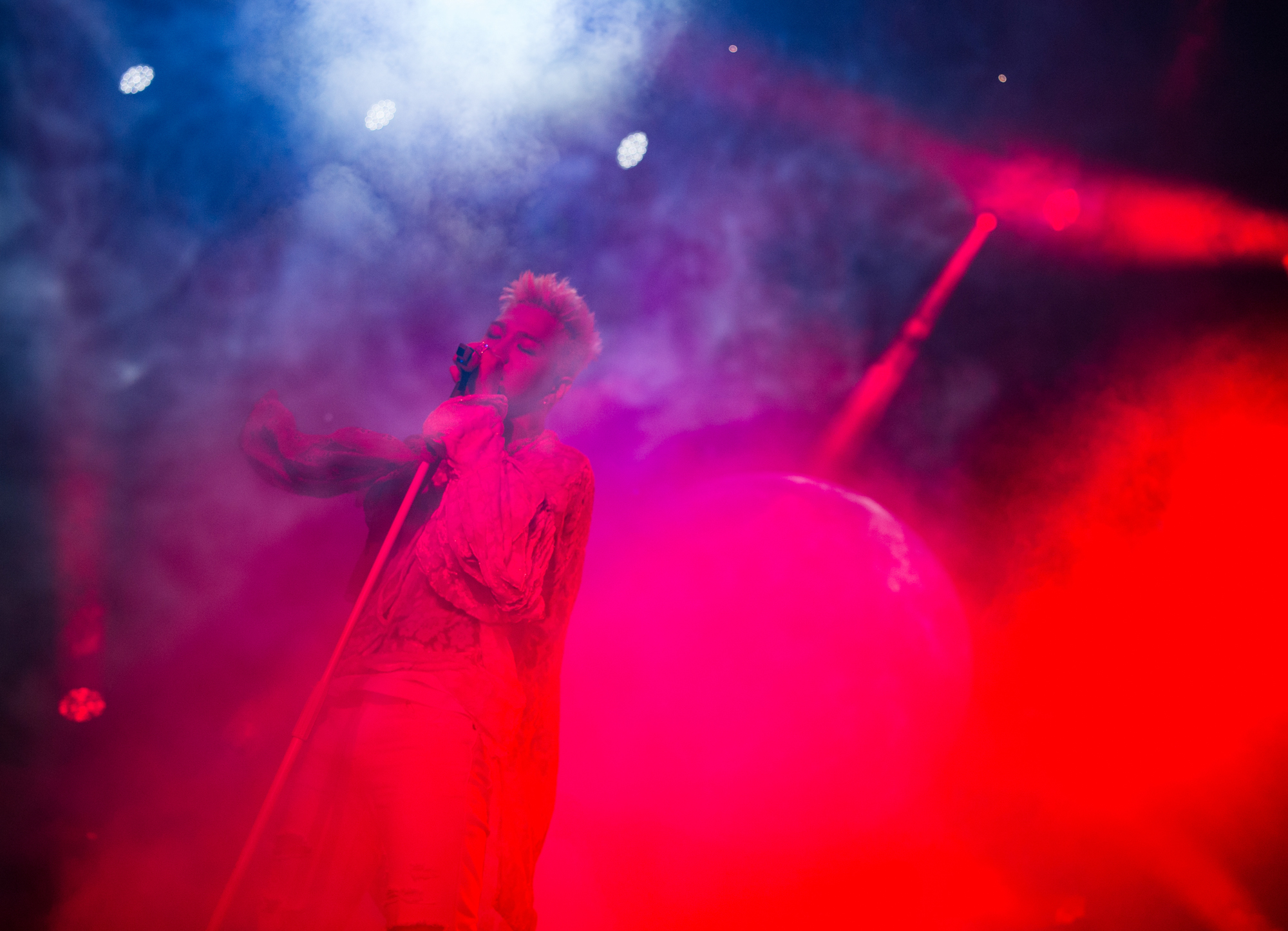 Returning to the stage with a keyboard, Taeyang surprised the crowd by performing his group Big Bang’s “Last Dance.” Taeyang mentioned that he missed the other members of Big Bang and that one of his happiest moments is having been with the group for the past 10 years. He then closed the show with his latest title track “Darling,” crooning the lovelorn lyrics to the crowd.

Unlike other K-pop concerts where fans chant for quite some time for an encore, Taeyang swiftly made his way back to the stage with a surprisingly lengthy 6-song encore. Performing more Big Bang songs and collaborations with his fellow members, he jammed out to “Good Boy,” “Bang Bang Bang,” and “Fantastic Baby.” He seemed to dance harder during these songs as if to make up for the rest of the members not being there. He amused the crowd by playing with some fan gifts throughout the encore, as he danced intensely while wearing a flower crown and even spun a huge fanmade daisy fidget spinner, modeled after his own concert merchandise.

To truly finish the night off, Taeyang performed “Eyes, Nose, Lips,” the perfect and bittersweet way to end the concert. The show felt like it flew by in a flash and spanned Taeyang’s career as a solo artist and as a member of Big Bang. With Taeyang planning to enlist in the military soon, this tour serves as part of his preparation to bid farewell to his fans. With how passionate his fans were tonight, it’s safe to say they’ll be patiently waiting for his return to the stage. 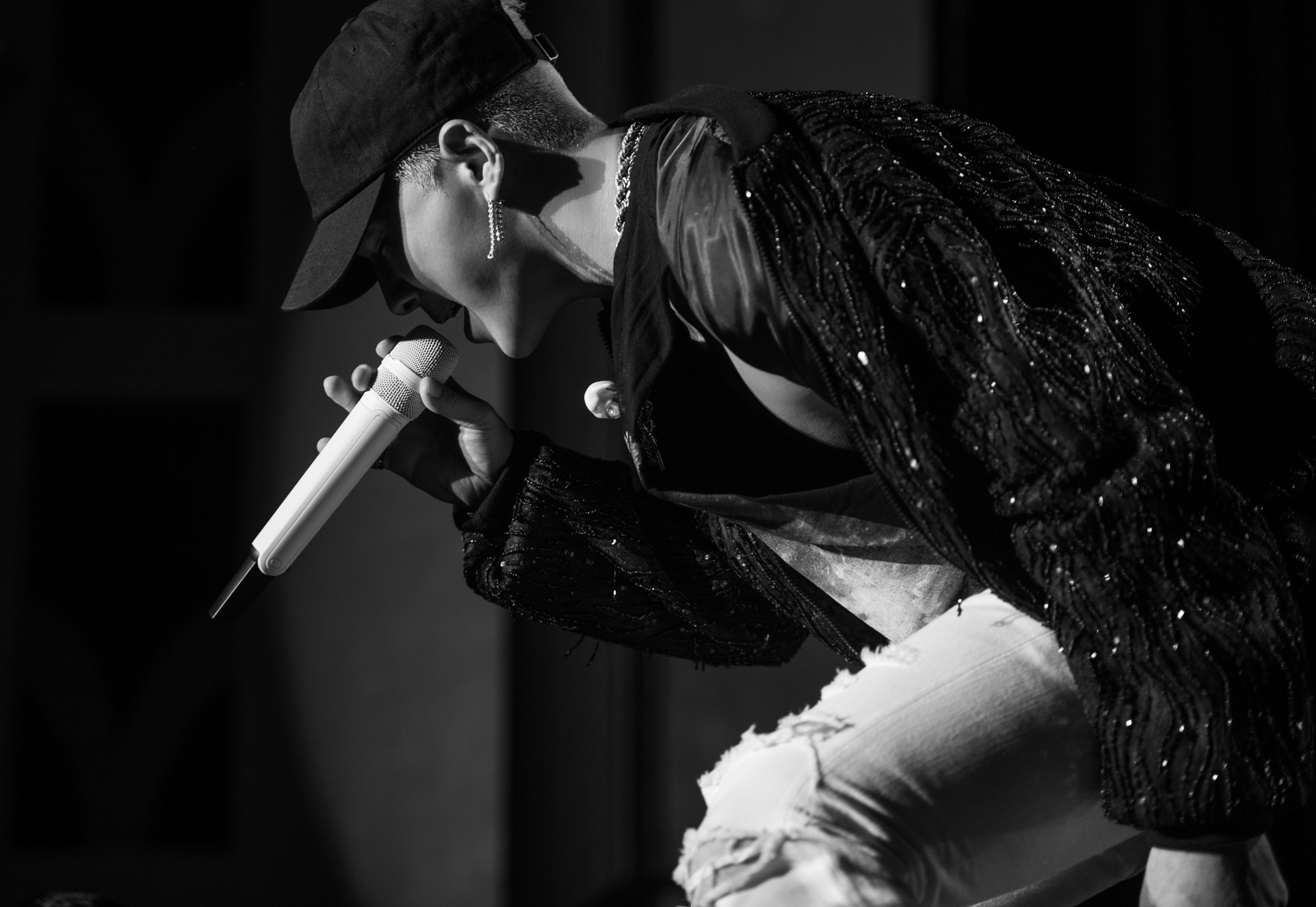 All photos courtesy of KPOPME Entertainment