The hit Netflix series Voltron: Legendary Defender is back again with Season 3. Compared to the previous two seasons, the most recent one had more callbacks and Easter Eggs to the original Beast King GoLion anime series. South Korean animation studio Studio Mir brought out the best in animation for Voltron’s robotic fight scenes and hand to hand combat with Prince Lotor and the Paladins. Although Voltron: Legendary Defender made many references to the original series, the creative team also deviated from the source material in surprising and progressive ways. One of these changes includes greater diversity in the cast, not only behind the scenes, but also on screen. Dreamworks has outdone themselves again with Voltron’s plot twists and new characters, all of which have been keeping fans on their toes and abuzz on social media.

APA: Lotor originally had a harem in the original Beast King GoLion series. In this series, Voltron: Legendary Defender has turned that on its head.

Lauren: It actually wasn’t but…

Joaquim: …may have been a subconscious decision.

Lauren: We were looking for ways to make Lotor different and we haven’t had a lot of female Galra in the first season. We had this idea that Lotor would have many ranks of female Galra, but we ended up wittling it down to these key four women that were his main go-to. We wanted to make them as interesting as possible and define that contrast between him and his generals as stark as possible.

Joaquim: We had initially talked about Zarkon having a “no women” policy, but we didn’t go with that idea.

Lauren: There are other female Galra, officially.

APA: In the premiere, we could see Lotor’s hair flowing during the fight scene, very much a Bishounen-esque style. He looks a little like Legolas.

Joaquim: Or maybe Lotor reminds you a lot of Legolas.

APA: That’s true! What’s the thought process behind those model shots folded into the fight scenes?

Joaquim: That shot in particular was handled by Kihyun Ryu of Studio Mir. He goes above and beyond for those scenes. There were a lot of moves, even one where you can see Lotor barely getting out of the way and at one point getting his hair cut. Those are all little nuances that Ryu brought to that fight scene.

Lauren: Overall, the Galra Empire is all about force and strength. With them, the bigger and stronger you are, the better. Lotor is very much not that and focuses more on intelligence, where you think about a situation before you force your way in. The fight scene was meant to be a visual representation of that.Joaquim: He’s the guy who would find the path of least resistance. In the end, he says these noble things to the crowd, and when he turns around, you suddenly wonder, “Where is this guy coming from? Is he doing this to just get someone out of the way? Is he petty?” You don’t know where he’s coming from, but he’s got a plan.

APA: Tell us about the cat. Will there be a fight between the mice and the cat?

Lauren: My dream would be to have a space cat vs. space mouse fight. It was our nod to the cat from the original, who originally belonged to Haggar. We thought that we could bring this cat with this really unique character, who has a special tie with the animal that she has. We were thinking, “What can we do to make to make these alien races different? Here’s an alien race that bonds with an animal, but which animal? How about this cat that we can Easter Egg here?!”

Joaquim: It’s kind of through Lotor, and not directly through Haggar. Still, a bad guy with long flowing white hair. 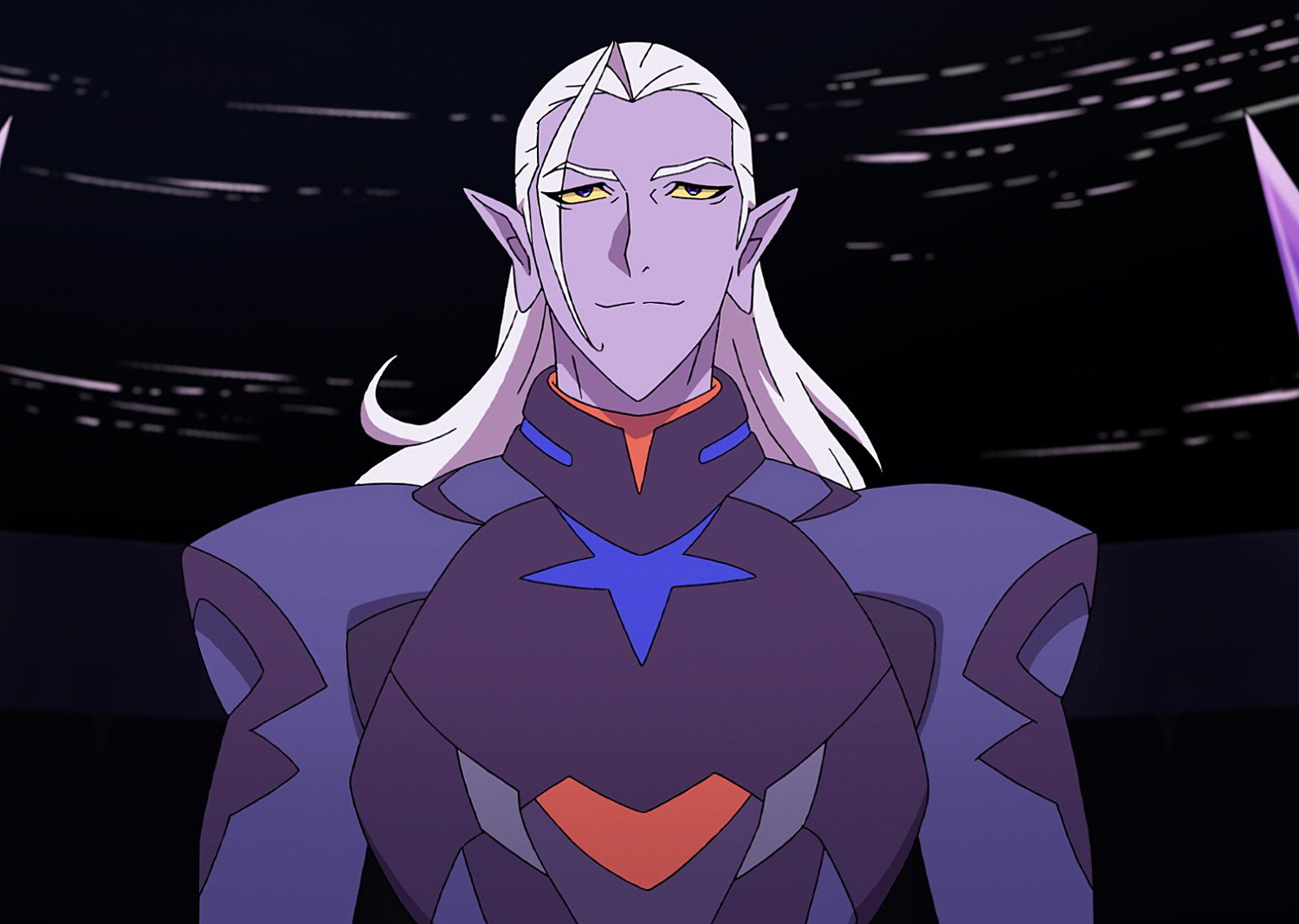 APA: You mentioned how Lotor has a very different fighting style, similar to how Keith has a distinct fighting style. In the original series, Lotor was very fixated on Allura. Will we be seeing Lotor using mind games instead of using force?

Joaquim: Lotor is the guy who uses the psychology of the Paladins against each other. Keith is the exact opposite of him right now. Lotor is more methodical and Keith is running purely on emotion.

Lauren: I think it’s safe to say that we’ll see Lotor use more of his intelligence. In contrast with Zarkon, who wouldn’t talk to you and keep pushing forward to kill you.

APA: In this series, family has always been part of the plot. Will we see how Lotor views his father Zarkon?

Joaquim: I think that’s a pretty important part of his character. You can’t be the prince and out of the picture without having emotions tied into that.

APA: Earlier it was mentioned that he was exiled, right?

Joaquim: All that ties into his character and his reliability to the viewers. It’s all tied in there.

APA: How much backstory will we get of the old Paladins this season?

Joaquim: You’ll see backstory stuff, but we won’t give it away. We were super excited to show it here at the con. We knew people would either immediately get the correlation between the old Paladins and the new ones or they wouldn’t get it.

Lauren: We’ve known Alfor and Zarkon but we haven’t seen much of the other characters.

Joaquim: This is the part of the story that we’ve been able to take the most liberty with. It’s super fun to create a backstory and go beyond the original one.

APA: Previously, you mentioned Season 1 and Season 2 were one giant story that had been broken up. Is Season 3 and Season 4 possibly going to be the same?

Lauren: It’s the kickoff of Lotor’s story. He won’t end at the end of this season, but this is us ramping into his arc.

Joaquim: These smaller drops are meant to give fans something instead of going months without episodes. It allows us to give these small doses of characters. We didn’t plan to do 7 episodes and stop though, which was a decision done afterwards; it’s one big serialized story. 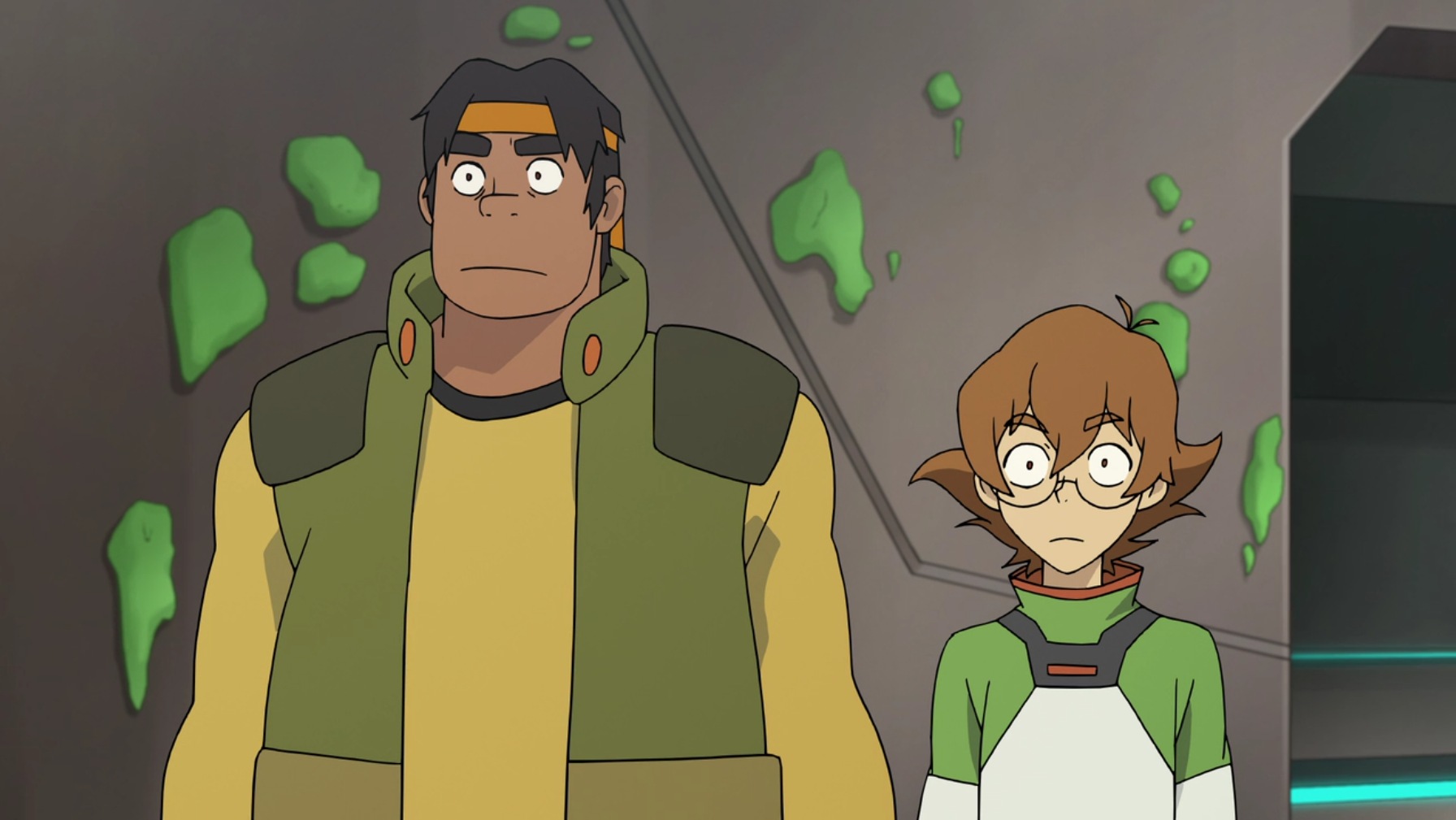 APA: We’ve seen the other character’s families, but will we get to see Hunk’s family?

Tyler: Obviously you can tell by our reaction that I’m holding something back. Hunk definitely has a family, but whether or not we’ll get to see them remains unclear. Your desire and Hunk’s desire to see his family are equally strong.

APA: Can you tell us a little about Pidge and her eventual reunion with Matt?

Bex: Yes, she’s definitely looking forward to that. That’s part of what this season is for her. She now has a visual on him and to help launch her in the right direction, at the very least, a direction.

APA: Lotor is definitely different from anything the Paladin’s have encountered so far. How will Pidge and Hunk react to him?

Tyler: There’s definitely out of character behavior during this season. He’s one of the most complex villains I’ve ever seen. Lotor is really well written and superbly performed by AJ. They’re all thrown in for a loop.

APA: Family is one of the big aspects of Voltron. Bex, you talk about your family all the time. Tyler, you are a father with three kids. How do you draw on your own family experience for your characters and is the family aspect what drew you into the show?

Tyler: There’s absolutely nothing better than being able to watch the reboot of Voltron with my children. The show is totally family friendly. There’s some violence but it’s all simulated and cartoony.

Bex: The high five scene.Tyler: Yeah, it’s definitely a family friendly show. In how that bleeds into how I play Hunk, it’s always at the back of my mind. How will this feel when kids view it? The childlike qualities of myself…I throw it all into when I record.Bex: Remember, the brown lion?

Tyler: We’ll talk more about the brown lion. You probably know what I’m talking about, it’s not too deep.

Bex: I started my career in deep, dark depressing things that my sister would never watch. Now, I have something my entire family can enjoy. My grandma has watched every single episode and still thinks my character’s name is Twerp. My entire family, whether they would be able to enjoy it even if I wasn’t in it, is able to enjoy it and talk to each other about it.

APA: What was it like to not have Josh in the booth? At least, I’m guessing because Shiro was missing.

Bex: They like to have him come in and do additional voices.

Tyler: Every week, we’d still be in the booth because we’d do random voices.

Bex: I like to go back through the wallows of the alien crowds and pick out Kimberly, Jeremy, or Josh.

Bex: We had Josh around a lot for random voices. We had our first day where all of us were back in the booth, and it was incredible. We spent 30 minutes talking.

Tyler: Lots of love for Josh.

Bex: We really have become a family.