Multi-talented Ian Jones-Quarter has worked on a number of famous titles: Adventure Time, Steven Universe and Bravest Warriors, just to name a few. This summer, his newest work, OK K.O.! Let’s Be Heroes premiered on Cartoon Network. As a new series joining the line-up of established shows such as Teen Titans Go! and Steven Universe, OK K.O.! is about a positive kid called K.O. who is looking to be one of the world’s biggest heroes. SDCC attendees saw a sneak preview of the first episode, with the opening sequence storyboarded by Hiroyuki Imaishi, co-founder of Studio Trigger. Drawing influence from a variety of styles from Korean and Japanese animation, Ian spoke about not only his own changing animation style, but also the collaborative efforts from Japanese and Korean animation studios on the show.

APA: Much like Steven Universe, where the show draws from a number of Japanese anime references, it looks like OK K.O.! will be doing the same. The previous mini-episodes were animated by various Korean and Japanese studios, including Masaaki Yuasa’s Science Saru, Studio Yotta, Moi Animation, and Rubber House. Whose decision was it to collaborate with them?

Ian: Cartoon Network tasked us with making a bunch of two minute shorts for the show. I wanted to do something different. Getting to do a bunch of short pieces of content instead of just doing something boring such as figuring out a style and tying it down, I wanted it to be something that would surprise the viewer every time they saw it. We thought, “Let’s come up with these stories and hand them to animation studios that we love to do them.” I was fortunate enough to meet Masaaki Yuasa, who did the Adventure Time episode “Food Chain.” I’m a huge fan of his. Mind Game was one of my biggest inspirations when I was in college. It was something that made me really want to pursue animation. I was able to meet him when we were doing these shorts at the studio. They came out great and he’s such an inspiration.

APA: What made you want to play fast and loose with the animation?

Ian: It’s an evolution of what we were doing on Steven Universe and Adventure Time. One of the things that Pendleton Ward of Adventure Time instilled in me was that people think a joke is a setup and a punchline. But that’s not all a joke is. It can be the funny way that someone sits on a chair or the funny expression they have on their face. What’s more important than the characters being on model is seeing that look on Steven’s face when he thinks he’s made a really good joke. It’s more important to show the audience how the character is feeling through the way they look. It’s so much more important in animation because you wouldn’t want to watch an animated show where the characters looked 100% realistic. You could, but I don’t know why you would want that. It’s a cartoon and you can do anything. What I also really love about it is that I work with an amazing crew of artists and having the freedom in style. Their drawings go directly from the board into the screen. You’re not watching a homogenized version of a cartoon that is a product. You’re getting to see a real drawing on the screen. That’s something we’ve tried to follow through with the entire visual of the show. We told our animation team to not fully ink the drawings. They’re done with a sketchy pencil line and I wanted it to be approachable. If you’re a kid watching the show, they might think, “This show looks like a drawing! Maybe I could draw this.” I remember that feeling when I was a kid and I wanted to show the audience that.

APA: In light of other superhero shows going on both in Western media and Japanese anime such as My Hero Academia or the DC and Marvel superheroes, what’s K.O.’s motivation for wanting to be a hero? 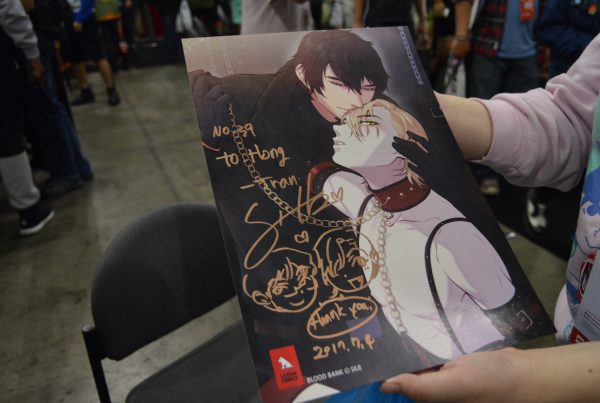