Earlier this year in January, Japanese rock band ONE OK ROCK released their latest album “Ambitions” and embarked on a 6-stop tour to showcase their new music. We caught the band’s San Francisco show, where they rocked the stage and thrilled concertgoers with their energetic performance. Now ONE OK ROCK is back on the road again, putting on an expanded 29-show tour all across America, making sure to give listeners across the nation a taste of their music.

When working on “Ambitions” back in 2016, Taka mentioned “Taking Off” was one of the most memorable songs he worked on, as it was his first time working with a British producer, Dan Lancaster. “It was really different from working with an American producer. It feels more similar to working with a Japanese producer, but still different,” he noted. Working with more diverse producers reflects the band’s desire to reach a more diverse audience. With that, the band released both a Japanese and English version of “Ambitions” — but that also came with its own challenges. Taka explained, “In Japan, it’s still about Japanese pop rock culture. But I have to consider our American fans too, so we had to change a few songs. It’s a little difficult going from English to Japanese and the other way around since you can’t do a direct translation.” In terms of his thoughts on the cultural and musical differences between Japan and America, Taka expressed, “In my opinion, I think writing for the American audience is more simple in terms of lyric and melody. Japanese people are more complicated. Japanese words are super tiny and it takes so many words to say things, so we have to create more melodies for Japanese music.”

Playing shows nearly every other day on their “AMBITIONS NORTH AMERICAN 2017 TOUR,” Taka finds it important to stay relaxed and comfortable when offstage, so he can gather all his energy to leave it all out on the stage. He mentioned, “Some people think rock bands are always cool and crazy all the time,” but he really values his down time. To help unwind, Taka even decided to move out to California for the time being: “I like the weather and the people are very healing. Living in Tokyo is very similar to New York — they’re busy towns. It was a little annoying to me, so I wanted to go somewhere I could relax and feel refreshed.”

Being in California helped bring about some new opportunities as well, as Taka recently featured in Charli XCX’s “Boys” music video. The band’s American label, Fueled by Ramen, thought it would be interesting to have Taka join the video and he readily agreed: “I like that music video. I’ve never seen a video before with a lot of boys dancing and being sexy like that. It was an interesting and good experience.” Taka revealed that the shoot was done rather off the cuff and his scenes were actually filmed at his own home. When asked which member he would have invited to the shoot if he could, Taka immediately responded, “Our bassist Ryota ‘cause he’s actually a little funny boy. He would do something really funny, so I think I would pick him.”

Although open to other future project ideas and collaborations, Taka emphasized that his first and foremost priority is ONE OK ROCK. Taka added, “We’ve stayed together as a band for so long because we’re like a family. We’re always thinking about what we can do for the band and for our fans.” Having made a name for themselves in Japan, ONE OK ROCK is looking to take over North America and beyond. After finishing up their tour in North America, the band has plans to continue touring the rest of the world, hitting up countries in Europe, South America and Australia.

Stay tuned to APA as we’ll be covering their upcoming Los Angeles show on August 11! The band will be playing at The Wiltern on August 11 and 12. 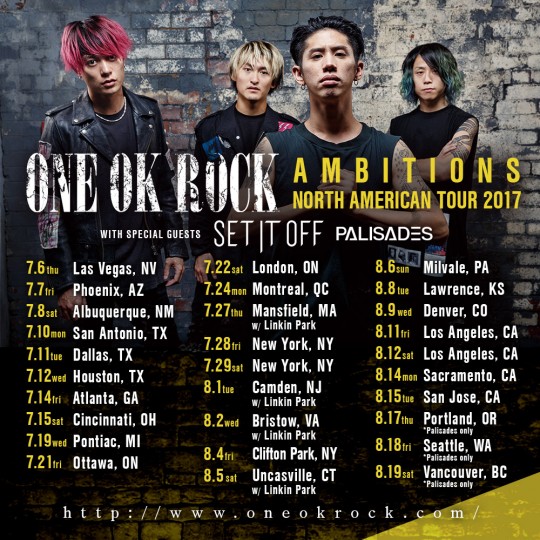