Popular manga and anime, Food Wars!, took the world by storm with its depictions of beautiful women and their reactions to eating delicious food. Although the anime and the manga provides equal opportunity for delectable and hilarious scenes targeted at both men and women, the story ultimately centers on food. Fans around the world have even recreated some of Food Wars!’s best dishes and uploaded them on YouTube. But exactly how do fan creations, such as art, reviews, or videos, impact and drive the Japanese anime and manga industry?

Asia Pacific Arts sits down with the writer of Food Wars! Yuto Tsukuda and discuss how he became the creator of this popular series, his experiences working on the series, and what motivates him to continue writing a series with a short deadline week after week.

APA: Would you care to introduce yourself and how you got involved in writing for Food Wars!?

Tsukuda: My name is Yuto Tsukuda and I’m in charge of writing for Food Wars!. Actually, the original idea of Food Wars! comes from the manga artist of Food Wars!, Shun Saeki. When he was drinking with his editor, Mr. Nakaji, and Mr. Saeki said, “What if this girl eats this really good food and experiences ecstasy? How about that idea?” But Mr. Saeki wanted to focus on drawing, and he needed a person who could write the story. Turns out he was one year above me in college. Since we knew each other, they called me immediately. Timing-wise, it was great. My previous work had just been cancelled, so I was trying to figure out what I wanted to do next. But at first, I told them I didn’t know anything about cooking. Then, Mr. Nakaji told me, “Well, you better start learning now.” Somehow, I managed to keep going until now.

APA: Who is your favorite character and why?

Tsukuda: I go through a lot of trends but in the end, I think I’d choose Soma. That’s because he’s someone I strive to be like. As a teen, Soma already knows he wants to take over the family business. He has already a skill for that and is tough because of a lot of experiences with success and failures through his school life. He’s kind of like a willow tree who is very flexible and can go up against any challenges. When I think about Soma from my perspective, we’re kind of opposites. I’m a little amazed I was able to create someone like him.

APA: What is your favorite food to eat or write about?

Tsukuda: If it goes with beer, I love any type of food. My favorite food to write about is rice-based food and Japanese cuisine. When it comes to anything outside of Japanese cuisine, I have to go out to eat and do my research. I think about how to express this wonderful taste. It’s a really tough challenge. But when I am writing about Japanese cuisine I am familiar with, I feel confident about our readers relating to the story. So, in this regard, Japanese food is my favorite to write about.

APA: Since you’re from Fukuoka, is there a chance we’ll ever see Fukuoka specialty foods such as mentaiko or motsunabe?

Tsukuda: I could have put a Fukuoka chef in the story, but the reason why I didn’t have a chef like that is because I have such a personal connection and it’s too close to home compared to other characters and other storylines. The character might give off a different vibe from the rest of the characters. For example, Megumi Tadokoro is probably from some area in Tohoku Prefecture and has a slight Tohoku dialect, but I purposefully obscured it. This is because I don’t necessarily want her to be seen as a stereotype. I actually got a comment from someone living in Tohoku who mentioned that her Aomori dialect is not right. But it hasn’t been defined where Megumi is from, so it’s not necessarily a bad thing. I might have something to do with mentaiko or motsunabe in the future, but I don’t necessarily feel like I have to put things like that simply because I am from Fukuoka.

Tsukuda: The three of us, Mr. Saeki, the editor and I, sit down, discuss it and decide what we’ll do. Often, I’ll be the one to throw out a suggestion and Mr. Saeki will add another comment or suggestion to refine that. In my head, the original idea I had for the magical cabbage chapter was that only Gin Dojima would change into a Magical Cabbage. He would change into a skirt like a magical girl, strike a pose, open his eyes and say “You’ve gotten better, Shinomiya.” In response, Mr. Saeki said something like, “I got it! We can make them transform like Sailor Moon or Pretty Cure. Someone would be Tuxedo Mask-esque with a little animal in the background, like Kyubey.” And I told him that he would be creating more work for himself and he assured me, “No, no. I got this.” So while we’re aiming to depict their reactions to the food, we’re always aiming to give our fans the unexpected, and that’s how Mr. Saeki, our editor, and I collaborate to come up with these depictions.

Tsukuda: The first chapter was really a breakthrough moment for me when I realized that I could make the guys become naked too.

APA: Who can we expect to be on the 92nd Generation of the Elite Ten Council?

Tsukuda: Soma. But at this point, we still haven’t quite decided just how long we’ll take this story for. We’ve talked about maybe writing through Soma’s graduation from Totsuki Academy. Another idea that’s been tossed around was wrapping up the story before he enters his second year. We’ll probably do an epilogue of some sort, regardless. We still need to discuss how Soma will be depicted once he’s in the Elite Ten. 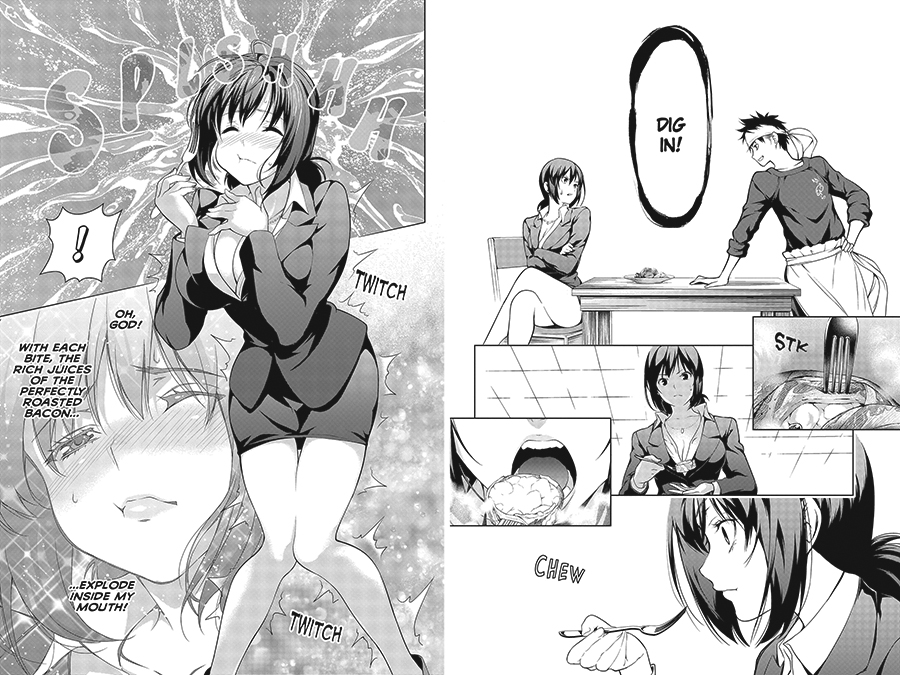 Tsukuda: One of the background plot elements in the story is Soma finding a girlfriend or a future wife. From the very beginning, we had planned on including various female characters who would appear over the course of his adventure and have their relationships develop over time. Once Food Wars! started to get popular, the fans are always curious as to how these characters will experience ecstasy. Without the female characters, it wouldn’t be Food Wars!. Of course, the guys also have their clothes removed too.

APA: How are you liking Los Angeles? It’s known as one of the most food diverse cities in the world and I was wondering if you wanted to try anything specific. LA’s specialty is In-N-Out among other hamburger joints.

Tsukuda: I am really enjoying Los Angeles. I walked around Santa Monica, ate Italian food and tapas, and walked around the Farmer’s Market to see what kind of ingredients were there. But, my main goal of coming to Los Angeles was definitely to eat burgers. I’ve had a lamb burger and a turkey burger so far. Both were fantastic. It seems like everyone knows about In-N-Out and I want to challenge myself to go eat it.

APA: Earlier you mentioned that you like beer. There’s actually an area nearby Little Tokyo called the Arts District, which has many distilleries and beers available.

Tsukuda: We actually went to Grand Central Market and got some beer there.

APA: Do you have a message for your fans here and around the world?

Tsukuda: I’ve had times where I’ve lost confidence in my work. This is also a weekly series, so it does wear me down a bit. But I’ll look at YouTube videos from fans outside of Japan who review the manga and I remember just how many people across the world are looking forward to the next chapter, and that really helps me power through work that week. My manga is how I give back to my fans around the world. Thank you.