It’s no secret Hyorin (also known as Hyolyn) is talented; her powerful vocals led fans to dub her South Korea’s Beyoncé. She joins the latest trend of leading female K-pop stars to debut in America. Her March 19th performance at The Mayan in Downtown Los Angeles drew in a strong crowd that waited several hours before the concert to be at the front of the stage. Transparent Agency’s showcase of talent began with Lijah Lu, followed by Jun Curry Ahn, and closing with Hyorin’s power hour of extraordinary vocals while dancing.

Prior to and intermittently throughout the show, DJ Eman from Los Angeles-based radio show “Power 106” played mixes to set the stage for the following acts. Up and coming singer Lijah Lu demonstrated his R&B/soul style whose voice sounds like a mix of Justin Timberlake and Ne-Yo. Alongside him was a group of hype dancers who rhythmically hit every beat with their bodies. His set ended with a Latin-inspired acoustic song, having fans SoundHounding for his album.

YouTube sensation and violinist Jun Curry Ahn, who has previously opened at large shows such as KCON, took the stage. In addition to being a talented dancer, he played violin covers of K-pop songs by groups like BTS and Big Bang, interspersed with more classical pieces from Korean dramas such as “Descendants of the Sun.” A stunning background with a gentle blue lighting provided a soft contrast to his new pink hair. A group of rowdy, but good-natured fanboys sang along with Jun’s violin-playing, causing some laughs and lightening the serious mood of the more dramatic songs.

After a long intermission, Hyorin finally appeared on stage. She brushed off any tiredness with flair, even though she had just performed a concert in New York the night before. The audience crowded the stage in joy, taking out their phones in anticipation for her first note into the microphone. Bouncing and strutting around in her red stilettos in “Crazy in Love” fashion, Hyorin beamed at the crowd, smiling from ear to ear.

Her Beyoncé-inspired look of a white crop-top, booty jean shorts was very in tune with current Los Angeles fashion. Outside, the night had been colder than what most Angelenos were used to, but inside, Hyorin fired up her fans with a back-to-back performance of “Paradise” and “One Way Love.” The showcase was split into three acts, which was a little different from the typical style other K-pop singers have performed at their US shows. Each set navigated through sexy cool dances to cute clear vocals.

Though there was no interpreter to translate Hyorin’s Korean comments, her loyal fans in the pit cheered fiercely, while enthusiastically waving fan-made posters to everything she said. Despite this being Hyorin’s debut solo concert, she was perfectly comfortable on stage, showing off her sexy dance moves and even taking some time to pose for the cameras; her confidence and fierceness made the show. Admittedly, the concert could have turned awkward if it was anyone else. 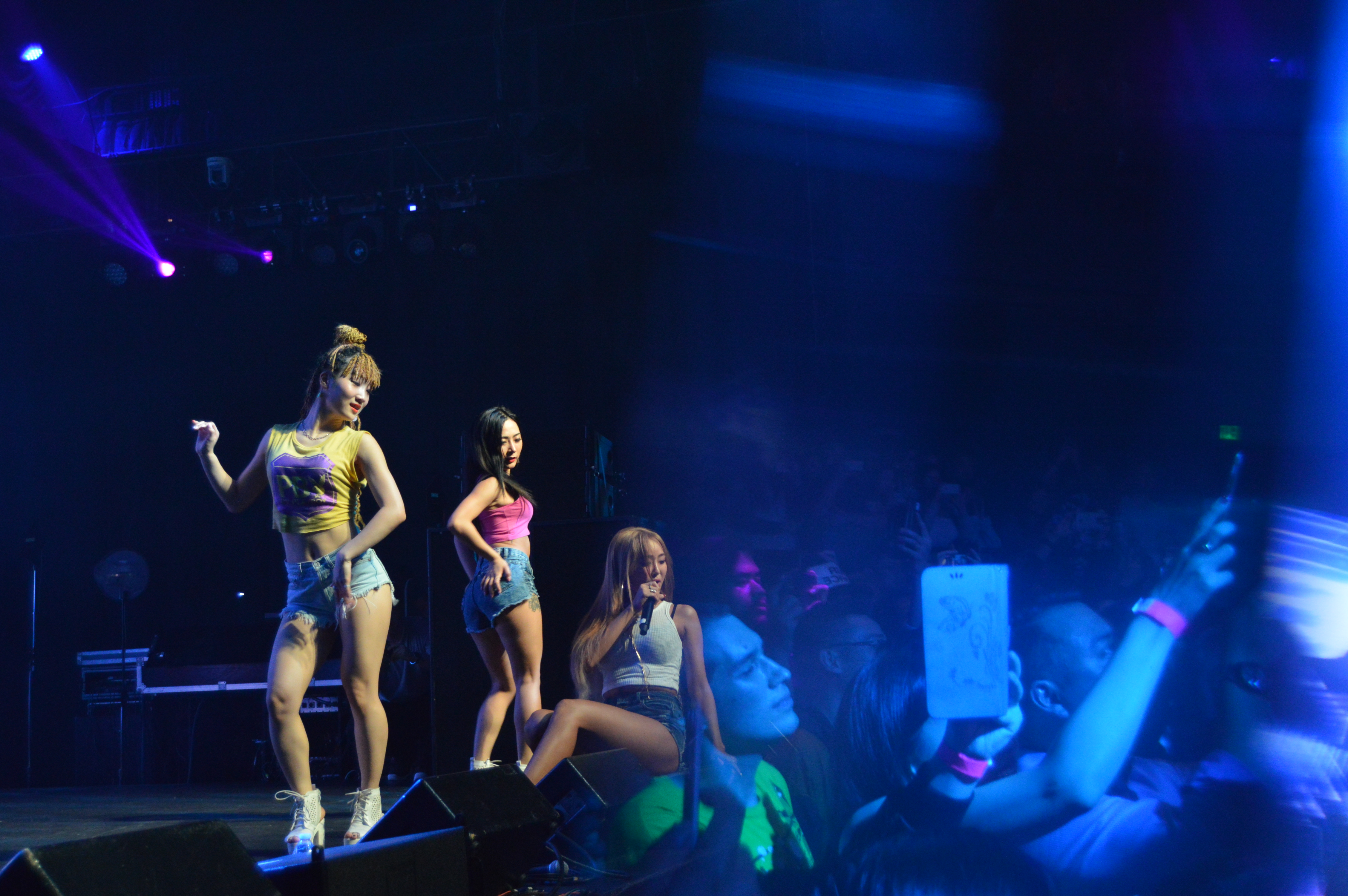 Act one transformed the show from a light party to a sensual display, as she performed her famous body rolls to a club remix of “Ma Boy.” Fans screamed in delight with her every hair flip, booty pop, and trademark smirk.

Act two slowed down the show to switch out Hyorin’s dancing skills with singing during, performing SISTAR’s songs like “Shake It” and “Touch My Body.” To show her appreciation, Hyorin gave a heartfelt shout out in Korean and English to everyone in the crowd.

Finishing off her show in the third act, Hyorin unleashed her powerful vocals in her rendition of Ariana Grande, Jessie J, and Nicki Minaj’s “Bang Bang.” Despite taking the stage alone, Hyorin proved her performance prowess by singing every single part, even Minaj’s famous rap, and enchanting the crowd with her vocals and stage presence.