All photo credits to WM Entertainment

Despite entering the venue early, it would have seemed like the concert already started, as all the fans were enthusiastically singing, chanting and dancing along to B1A4’s music playing at The Warfield. In other words, the excitement was very palpable, with fans hyping each other up for the imminent show.

Dressed in 3-piece suits, B1A4 bounded onto the stage performing “Melancholy” and feel-good track “In the Air,” getting the crowd to throw up their hands to the song. Soon after, the show took an unexpectedly quick turn to slower and moodier tracks like “Oh My God” and “Nightmare,” with fedoras to match the ambience. Though B1A4 executed the songs well and showcased the more mature side of their discography, it felt a little too early in the set list and threw off the momentum of the excitement they built up in their opening.

However just as quickly, the group dove into sweet, romantic songs such as “You,” inviting fans to sing the female portion of the song, and “Crush On You Again,” lifting the mood again. Things started really picking up when B1A4 began performing nearly all their title tracks back-to-back, starting off with “Lonely” and their latest one “A Lie,” which had the crowd screaming.

Though the boys returned to The Warfield with a much more stripped down and simple setup compared to last time, they did not forget to bring their signature cuteness and creativity, offering to take attendees in a very “expensive” time machine before launching into a medley of all their title tracks from their debut song “O.K” all the way to “Solo Day.” To finish it off, they also performed “Glass of Water,” when Baro began carrying out crate after crate of water bottles onto the stage.

Regardless of all the rain San Francisco has had these past few weeks, B1A4 insisted on bringing their own “rain,” as Baro set down the nth crate of his seemingly endless supply of water bottles and asked, “Are you ready for a shower?” The group proceeded to douse the crowd with water all through a club rendition of “How Many Times,” remixed by Jinyoung.

Not only did B1A4 drench the audience to their heart’s’ content, the group also showered their fans with affection. The boys were eager to interact with attendees, as Baro stepped up and tried his hand at MC-ing in English. Clearly proud of himself for learning some English slang, Baro repeatedly asked the crowd, “Are you ready to get LIT?” The fans cheered in affirmation, just as pleased by his English efforts.

Throughout the show, the group often crouched down to sing into people’s cameras, played with their gifts and continuously waved to the crowd both on the floor and balcony. Baro mentioned that they went to Pier 39 the day before and had some delicious crab, but “nothing is better than BANAs (B1A4 fans)” because “crabs are not pretty.” To their fans’ delight, the members also teased each other incessantly, particularly targeting Sandeul by spinning him around and squishing his cheeks at every opportunity.

Closing the show with “Good Timing,” B1A4 resumed dousing the audience with more water. But whenever it seemed like the end was near, Baro would say, “Do you want more?” Each time, the crowd would respond with a resounding “Yes!” and the music would start up again for another round of the chorus and water throwing. This went on for about three times, before the show officially came to a close. From beginning to end, B1A4 put on a concert that showed how much they love their fans, spoiling their fans silly with heaps of affection (and water) and a promise to return soon. 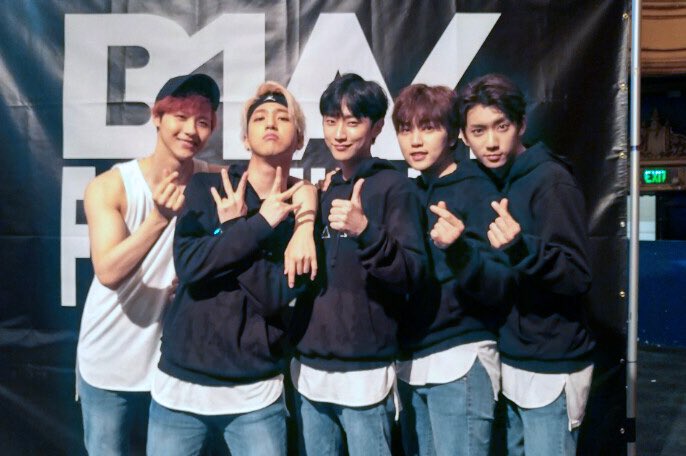