When ONE OK ROCK was King of The Warfield 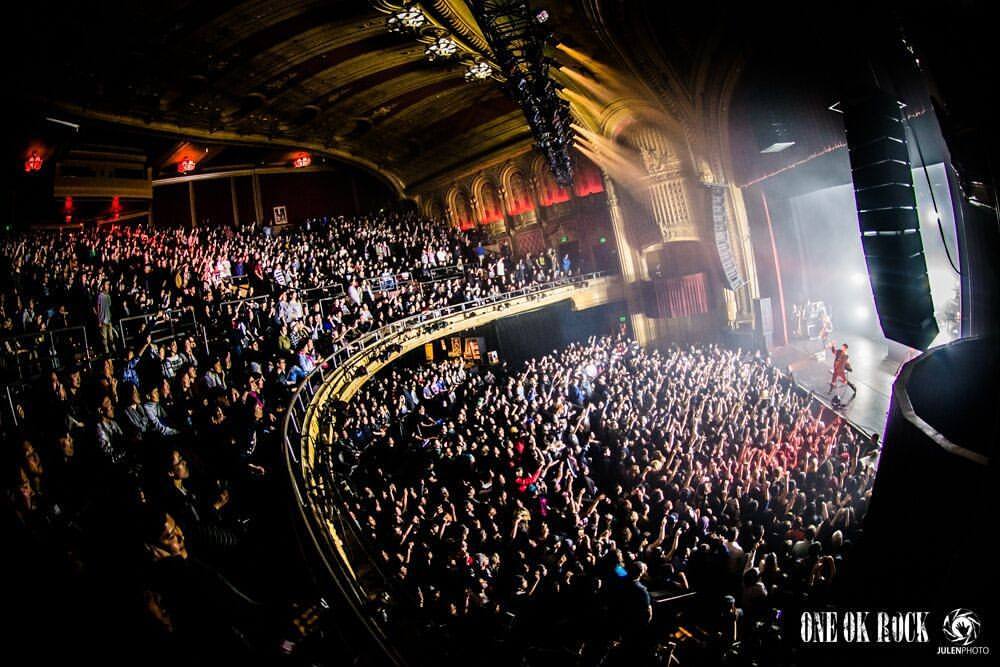 Following the release of their album “Ambitions” under Fueled by Ramen, ONE OK ROCK embarked on a 6-stop tour across North America. The heavy rain and high wind warnings in San Francisco did nothing to stop fans from going to see the Japanese rock band. Hours before the show, a long line of people under umbrellas wrapped around the theater, nearly circling back to the entrance. As soon as the venue doors opened, fans rushed inside to secure their spots for a packed show. ONE OK ROCK certainly made it worth their fans’ time waiting out in the rain, as they heated up The Warfield with their contagiously high energy and vivacious performance.

After a brief set from opening band Our Last Night, ONE OK ROCK exploded onto the stage with powerful tracks “Taking Off” and “Take Me to the Top.” Vocalist Taka energetically bounded across the stage, gesturing to the crowd while the rest of the band played their hearts out. Though the band released all-English versions of their recent albums, they primarily performed the Japanese versions of their songs on their North America tour, which didn’t faze fans at all as they still sang along enthusiastically.

Diving into some songs from their older releases, the band rocked out to “Cry Out” and “Deeper and Deeper” with some synchronized headbanging. The show featured a wide range of styles from ONE OK ROCK’s discography from their older heavier songs to their more recent pop rock tracks, showcasing their versatile and evolving style. This made the show inclusive for attendees who enjoy different kinds of rock across the spectrum. The band couldn’t forgo performing one of their most notable hits “Clock Strikes,” which had the crowd bustling with excitement upon hearing the opening lyrics. Like in the music video, Taka brought out a mic stand and impressed the audience with his belting of the song’s signature long note, which he held even longer than in the original, resulting in the crowd erupting in cheers.

Performing a number of songs off their new record “Ambitions,” ONE OK ROCK touched concertgoers with “Hard to Love,” a song Taka wrote about his father. The band toned it down for a barer instrumental performance, which mostly focused on Taka’s passionate singing. The moving song and its lilting melody had fans swaying along.

Kicking things back into high gear, the band performed high energy songs “I Was King” and “Take What You Want,” followed by the hopeful and inspiring track “We Are.” Throughout the entire show, Taka’s solid vocals sounded exactly like on CD, but even better live with the band’s strong stage presence and intense energy. The crowd couldn’t help but rock out just as hard as ONE OK ROCK, with the distinct smell of sweat in the air as clear evidence. And deserving of mention, the stage lighting of the show was phenomenal and heightened the experience, as different colored lights flashed and beamed across the stage in sync with the beat of each song.

The boys returned for a quick encore, playing their playful and upbeat track “American Girls.” A testament to ONE OK ROCK’s successful show at The Warfield is even after the concert was over, the line for merchandise went out the door, as concertgoers sought to find any way to hold on to their memories of the incredible night.