8-piece Japanese traditional and Western rock fusion group Wagakki Band embarked on their 1st US tour “Deep Impact” in July, traveling across the West Coast and performing in 3 cities in California. The band returned to Los Angeles, where they previously performed at Anime Expo 2015, and performed for the first time in San Diego and San Francisco. Wagakki Band successfully left a “deep impact” on audiences with their unique musical style and energetic performance.

After finishing their tour, APA chats with Wagakki Band about performing in the US and preparing special performances, as well as learns more about the group’s members. 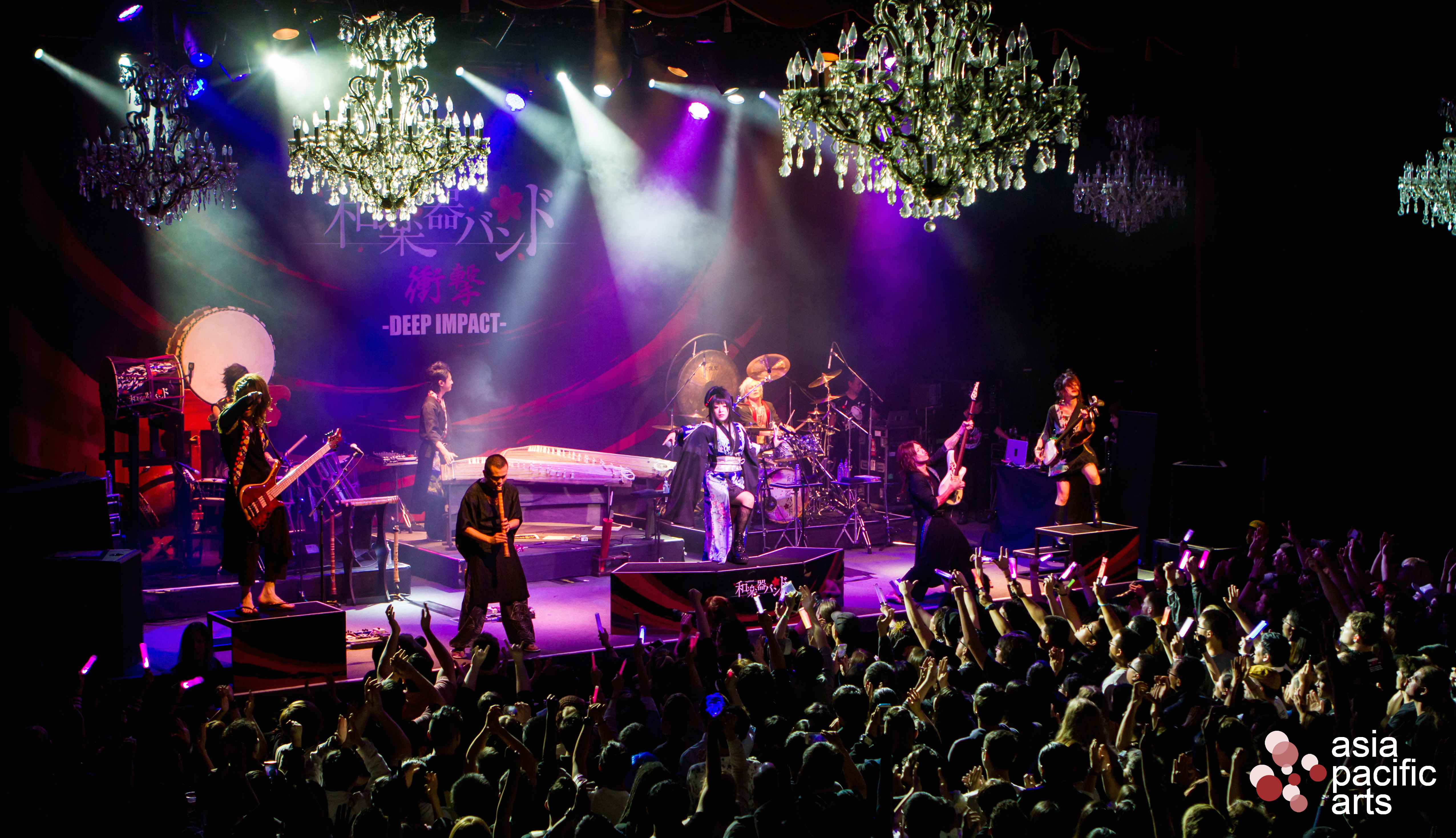 APA: Congratulations on completing your West Coast tour! How do you feel about the tour now that you’ve completed it?

Kiyoshi: I am really happy that we were able to hold our first West Coast tour in the US. I would like to express my gratitude to all the American fans who cheered us on.

Beni: We have really been wanting to perform overseas, so to be able to successfully hold this tour makes us very happy. This experience is very precious to me, so I’d like to thank everyone for that.

Wasabi: The best! It was such an honor to perform where rock began and I was able to become more confident in myself.

APA: This year Wagakki Band has performed in various cities across the US such as New York, Texas and California. What kind of interesting American culture or trends did you learn? Did you experience any culture shock? If so, can you share with us?

Yuko: America is such a big country and each city has a different history. The audience’s reaction to our music was different in each place too. For me, culture shock was food. It happened so many times where I would order something and it would just come out looking completely different from what I imagined, like in size. [laughs]

Kurona: It seemed like many Americans were really interested in Japanese culture. When I went to the supermarket in Little Tokyo, it sold so many things similar to in Japan that I was shocked. Also, the salmon at the supermarket was way tastier in America than in Japan. [laughs]

Wasabi: Because America is so big, I found it so interesting that there are so many different kinds of people and kinds of music they enjoy. I’d really like to learn more about where different styles of music originated and how cross-over happened. I experienced culture shock here when I learned that some places don’t sell alcohol after 10PM!

APA: As Wagakki band is a fusion of Japanese traditional instruments and Western rock ones,did you receive any Western musical influence while traveling in America?

Yuko: Because we were so busy with our tour schedule, there was no time to really get that instrumental culture exchange. I hope that next time we can make more time for that.

Kiyoshi: It was too bad that while we were here, we weren’t able to listen to other musicians. But seeing the photos and autographs of musicians that I knew on the venue walls, it was extremely moving to know that I got to stand on the same stage as them.

Dai: Personally, having sessions with street performers in New York and SXSW artists was really fun. Although this isn’t directly musical, I received inspiration from the American scenery, atmosphere and food.

APA: Like the tour name, the show certainly left a “deep impact” on attendees. Does the group have a pre-performance ritual? Something the group always says or does to energize the group before a performance?

Yuko: Yes, we get in a circle, put our hands together in the middle and Kurona yells “Orya!” and we all say “Saa” three times. Then, I high five everybody. 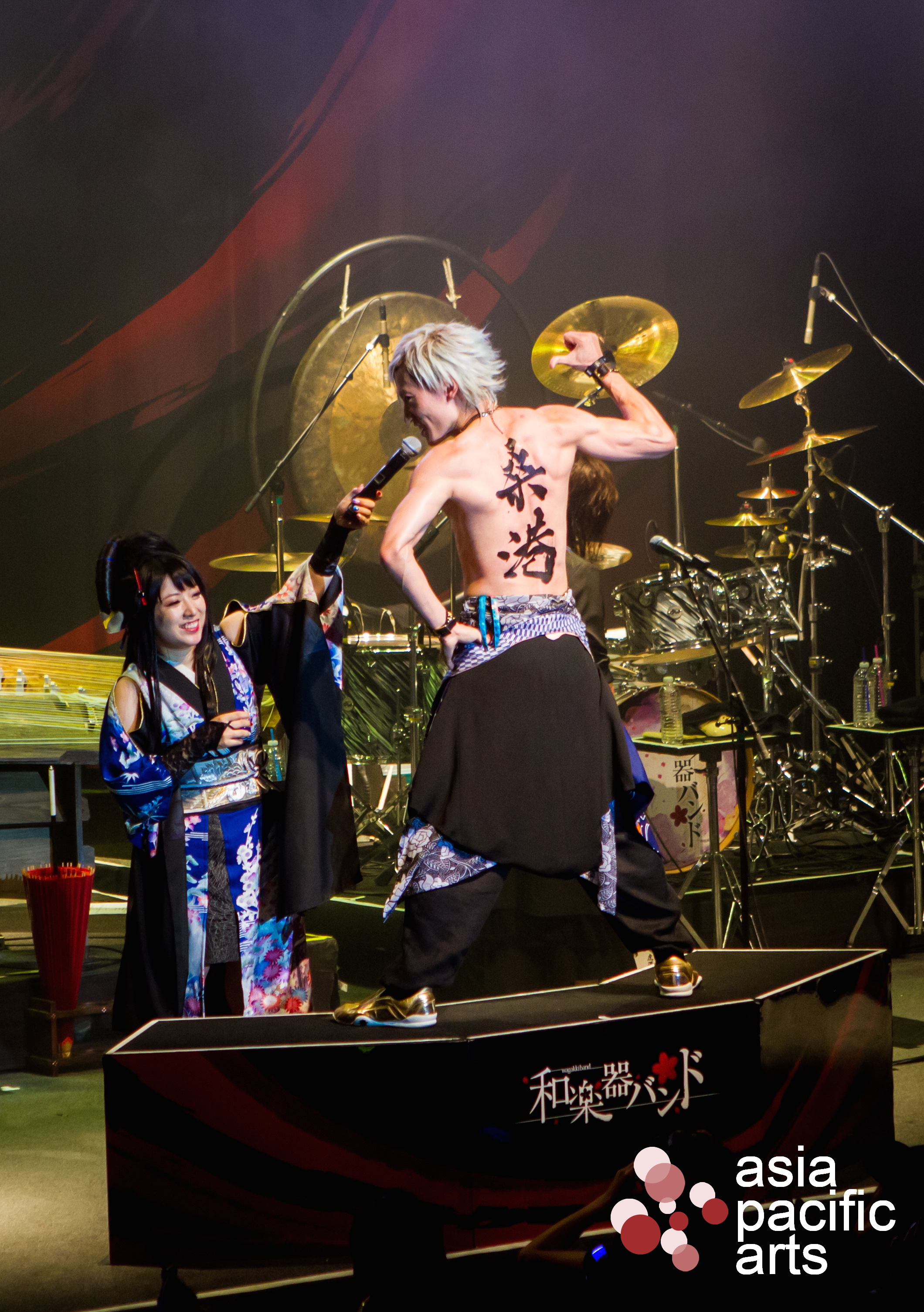 APA: Aside from the great music, the show incorporates so many entertainingperformance aspects such as Yuko performing kenbu or performing with a fan and parasol. How did you decide to incorporate these props into the show?

Yuko: Since I was 5 years old, I started performing shigin, traditional Japanese dance and song and sword fighting. I became really familiar with the kimono, fan and Japanese sword since a young age, so growing up, I learned how to add facial expressions and emotion. So this has become deeply embedded in me and I’ve created my own style. Creating my own choreography to Wagakki Band is the first time I’m challenging this, so I’m really enjoying establishing my style.

APA: Also, the drum battle stage was such a hit with the crowd as well, both musically and comedically. How did both Kurona and Wasabi go about planning this performance?

Kurona: Thank you! Because rhythmic instrumental music has no lyrics, I think it’s the kind of music that can reach everyone’s hearts across the globe. As Wagakki Band features both wadaiko and western drums, we thought it was a must to have a Western vs. Eastern rhythm performance in our show.During the cymbals portion, I used an instrument called a “chappa,” which are small handheld cymbals often used with wadaiko, while Wasabi used his drum cymbals. We used both instruments to simulate us playing catch, as if we were passing a ball back and forth. We also decided to use glowing drumsticks because when wadaiko players strike the drum, the form is really beautiful and we thought the glowing drumsticks would help highlight that more. During our Japanese tour, our rhythm performance really allowed the wadaiko and drums to shine, so this time we wanted to put on a spectacular show as well.

APA: For each member, if you could switch roles/skills with another member, what instrument would you like to play and why?

Yuko: I played the classic piano, so I would like to try the koto because it’s the most similar. Actually, I personally own a koto, so sometimes I play it for fun. Or I want to try the wadaiko for its dance-like movements.

Dai: I am in charge of the shakuhachi, but I’d like to try bass. I always play high notes, but I actually really like low ones.

Kurona: I play the wadaiko, but rather than change parts, I want to add another person to play wadaiko too. [laughs]

Machiya: I play the guitar, but because I’m practicing the shakuhachi, I think that would be good. I also won’t have a lot to carry if it’s a shakuhachi.

Wasabi: I’m in charge of the drums, but I’d like to try the guitar. I can somewhat play the guitar, but because I’ve never played in front of people before, I’d like to stand in front and play on stage while moving around.

APA: We collected suggestions from fans across the world to learn a little bit moreabout the members of Wagakki.

– Who is the most mischievous and why?

Yuko: Kiyoshi. Even if I don’t say the reason, I think our fans will know. Because he really is a mischievous kid. [laughs]

Kiyoshi: I think it’s me? Everybody is quite proper and nice.

Dai: Ibukuro Kiyoshi. Everyone always has to be careful around him because he’ll put something in somebody’s bag.

Kurona: Kiyoshi. He’s always by my wadaiko set, putting all kinds of small things on it and sometimes it scares us. On Halloween, he hung a bunch of skeleton replicas on the wadaiko and that day we were shooting for a magazine feature. And so, the wadaiko with skeletons got published in the article…

Wasabi: The most mischievous is Ibukuro Kiyoshi. Up until now I can’t even count the number of times he’s gotten me.

– Who is the most adventurous and why?

Yuko: Dai. Even only looking at a map, he always says he’s excited.Kiyoshi: Machiya. In order to broaden his horizons, he’ll try anything without hesitance.

Kurona: Because Wasabi likes bouldering, he’s always climbing on things, so I think he has an image that likes adventure.

Machiya: Kiyoshi. Because he’s just exploring all the time.

Asa: Wasabi. But he usually fails.

Wasabi: I think it’s me? I love aggressive exercising!

– Who is the funniest and why?

Yuko: Asa. But only when we’re in the dressing room backstage. We call him the backstage entertainer.

Kiyoshi: Kaminaga Daisuke. He knows a lot of stuff, so I hear a lot of interesting stories from him.

Kurona: Hmm.. everyone messes around when we’re backstage, but because we don’t show it on stage… it’s a secret.

Machiya: Asa always finds interesting YouTube videos and shares it with me.

Asa: Kurona. His voice is so loud. [laughs]

– Who is the cutest and why?

Yuko: To me, It’s Macchi~ Although he looks cool while he’s performing, sometimes he shows his childlike cute side. Like when he spills Genovese sauce on white clothes. I often see it. [laughs]

Kiyoshi: Beni. Because she always spills stuff on her clothes like a kid.

Beni: Dai. He’s what you would call the healing type (because of his cuteness).

Kurona: Yuko and Beni are quite natural, but the gap between themselves on and off stage is cute!

Machiya: Kiyoshi. His smile is cute.

Wasabi: There is nothing cuter than Dai’s head. 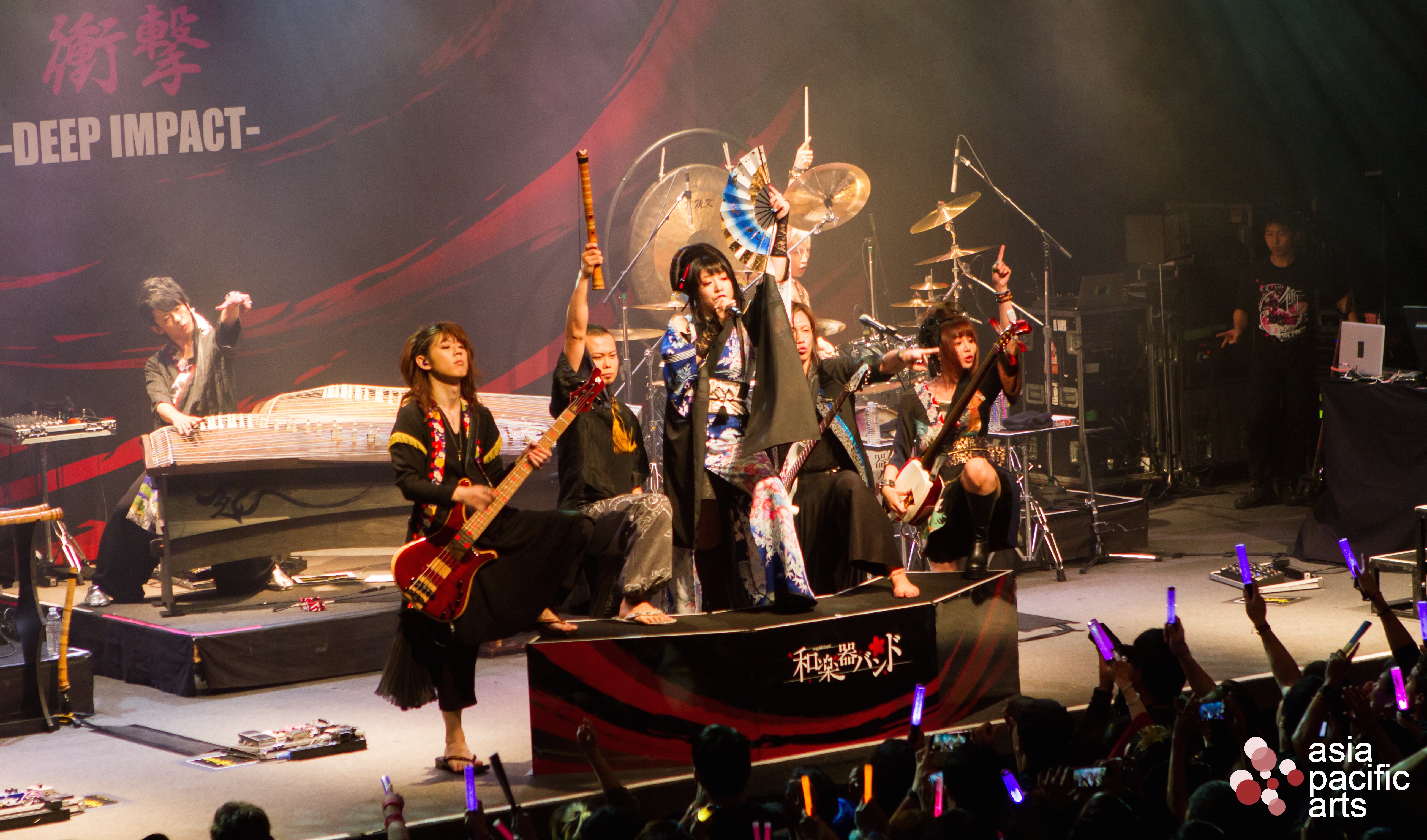 APA: Lastly while on tour, were there any memorable or silly moments you’d like to share with fans?

Yuko: In Los Angeles, Wasabi and Dai rode a mechanical bull at a restaurant and everyone in the restaurant was so excited. Kiyoshi and Macchi bought skate boards, so I borrowed one to play with, but I fell over. [laughs]

Kiyoshi: In San Diego, I bought a skateboard, but because I’ve liked skateboarding from long before, I was really happy to see people skateboarding up close. Also, when I was younger I watched the drama Full House and was glad I got to see the house in San Francisco.I have too many Hollywood movies I like, but I would say the feeling I had was like how excited the students in Sister Act 2 were when they went to Hollywood. [laughs]

Dai: Because I like foreign markets, I thought markets like LA’s Grand Central Market and New York’s Chelsea Market were really interesting places.

Kurona: On the Japanese tour, the promoters of each location said repeatedly, “It has been a while since I’ve seen a band drink this much” and that we’re a rare band. By the way, I’m the only one who can’t drink at all. [laughs]

Asa: Because Wagakki Band really loves drinking… there are… many memories that I cannot tell you…