If anybody has seen Wednesday Campanella’s debut US performance at SXSW, they would know KOM_I delivers quite the memorable performance. In July, she makes her way to J-POP Summit with a grand entrance on a makeshift palanquin. With every song, she adds a little special something whether she’s running through the crowd with a security guard desperately trying to keep up, playing with various selfie filters projected on a screen or crowd surfing in a huge inflatable LED ball.

APA sits down with KOM_I of Wednesday Campanella to talk about their latest album “UMA,” silly happenings at SXSW and what might be next for the group. 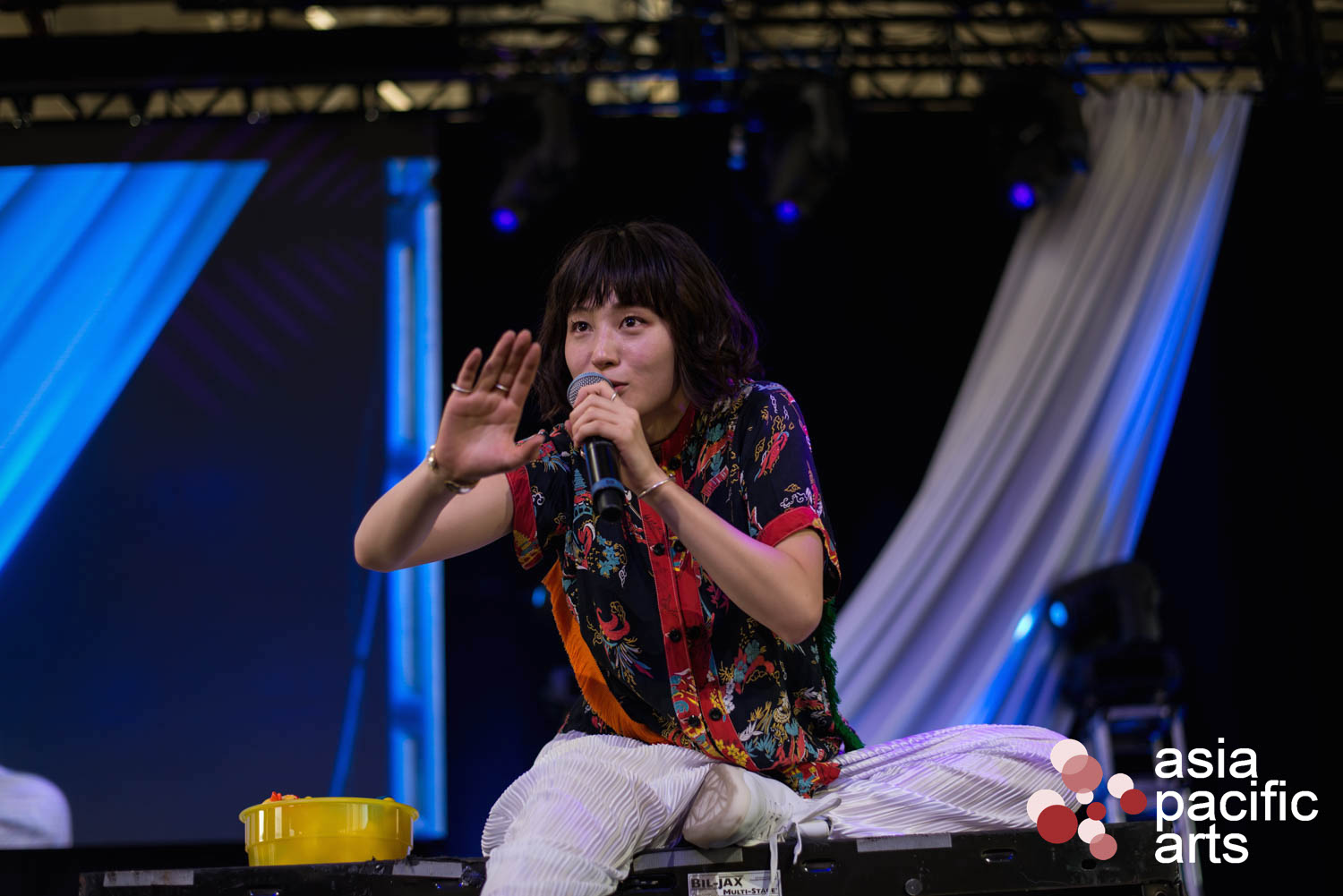 APA: Congratulations on your recent major label debut! You also recently released an album titled “UMA.” Can you tell us about that?

K: UMA stands for Unidentified Mysterious Animal like a phoenix. So, all the song titles are about different mythical creatures. One of them is a Japanese mythical creature called “tsuchinoko.” It looks kind of like a snake. It’s a very traditional Japanese creature that may only be in Japan. Ever since the Edo period, people would earn reward money if they could find a tsuchinoko.

APA: So when a tsuchinoko is found, what do people do with it then?

K: [laughs] I don’t know! Maybe they can… put them in a zoo? [laughs] A reptile zoo. I guess another problem will happen then. Zoos will fight for who gets a tsuchinoko. [laughs]

APA: Wednesday Campanella is also well known for its unique music videos. I hear that you play a role in helping decide what goes into the videos. What’s your role?

K: I’ve never directed, but I choose the director and make the team. Sometimes I think of the concept and work on it together with the team. Other times, I leave it to the director to decide.

APA: So for the “Tsuchinoko” music video, can you talk about the story behind that?

K: It has to do with the Olympics because it will be coming to Japan in 2020. In Japan, we’ve been having many problems with the Olympics such as deciding on the logo and the architect designed a building and forgot to plan for the torch stand. So in an ironic way, I’m seen holding a bouquet of flowers which represents the torch throughout the video. In Japanese, flower and fire can be read the same way.

We shot in many places around Tokyo that are likely to be changed due to reconstruction for the Olympics. Tsuchinoko are meant to be in places that haven’t been touched in a long time, so we wanted to film in these places that might change.

APA: I heard that you met the other members of Wednesday Campanella at a party and you had no intention of becoming a singer at the time. What made you decide to join the group?

K: There was a manager and he scouted me at a party. I didn’t trust him at first. [laughs] I thought he was scary. I thought maybe he will take advantage of my talent. But well, I had nothing. [laughs] Not sure why he wanted to scout me. But, he kept trying to scout me for a year and I saw how earnest he was, so I finally decided to trust him. [laughs] 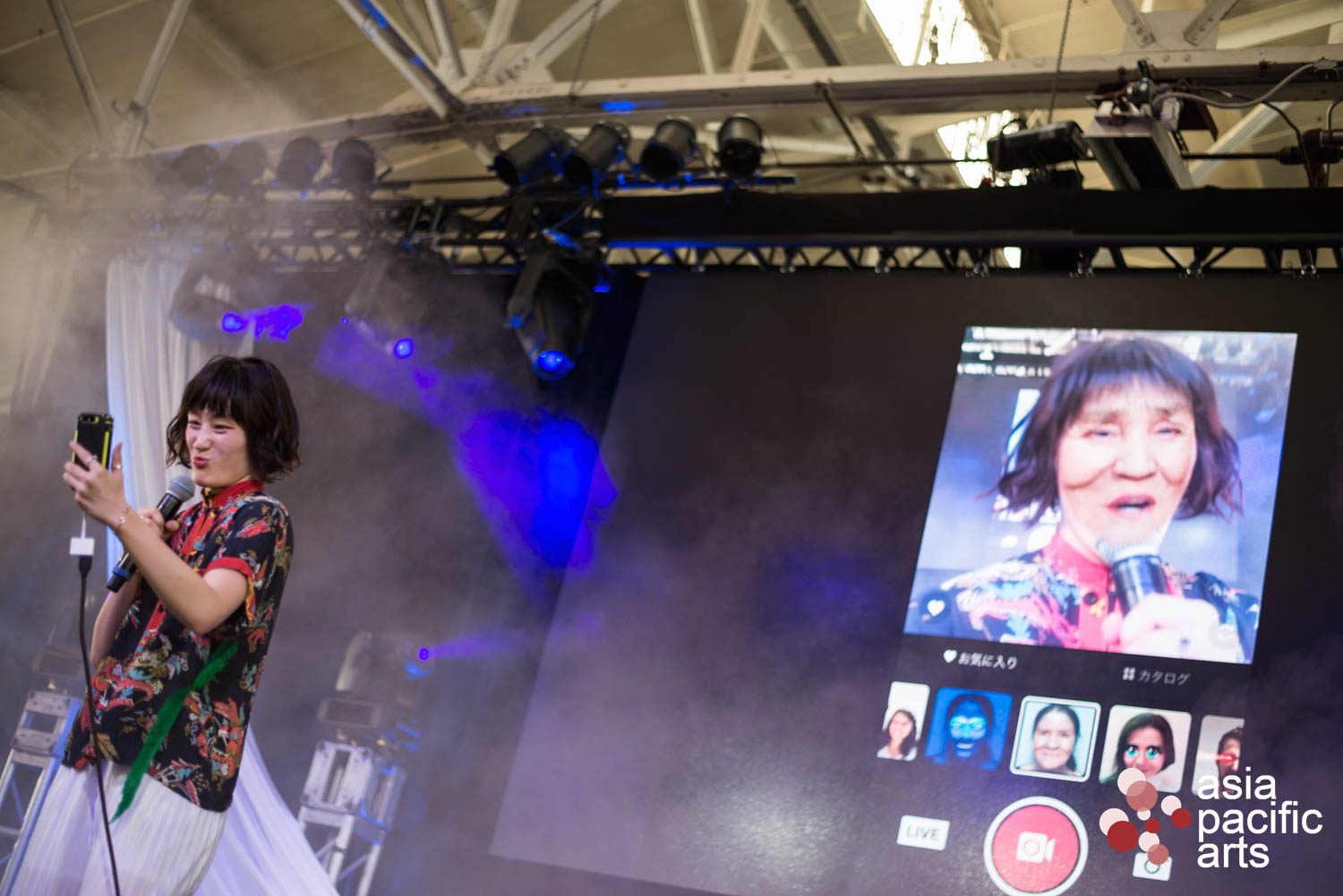 APA: Wednesday Campanella is known to be a trio, but we never see the two other members Kenmochi and Director F. Can you tell us a little bit more about them?

K: Well, Director F is the manager. Hmm… and Kenmochi is… a cutie guy. A cute guy. And a little bit small. American people think he looks like little kid. He produces the tracks for the group. He’s a little bit strange. Normally, he’s very cute and kind. He also usually calm us. But sometimes he does strange things.

At SXSW, he was there with us. In his hotel room, he opened the door to the balcony. The door closed behind him and got locked out. He was so upset and he actually jumped off the balcony.

APA: How high was his room?

K: Oh, just the second floor. I don’t know why he did it! He actually broke two bones, one in his hand and the other in his leg. He ended up not seeing my show at SXSW. [laughs] Now he’s in rehabilitation… and he’s still doing that. I don’t think I’ll bring him anywhere again. [laughs]

APA: What was everybody else doing when Kenmochi got locked out?

K: Oh, we were in our own rooms. Actually, the hotel owner noticed the whole thing. She was upset too. [laughs] He’s so crazy, maybe he didn’t scream (to let people know he was locked out). Actually later, the manager was the one who called the ambulance. I was working on focusing and preparing for my gig. [laughs]

APA: Earlier this year, you came to America to perform at SXSW. I saw that you had some really interesting performances where you climbed into a huge inflatable ball.

K: I’ll actually be doing that at JPOP Summit as well! But upgraded with LED! [laughs] My friend programmed that. The engineering team also has a booth at the Summit today and they made LED shoes which I’ll be wearing for the show too. I have other surprises prepared too.

K: Free and stupid! [laughs] And lots of dancing.

APA: Are you working on anything new? Any new concepts you’d like to challenge?

K: We’re working on our new album now. I want to change my hairstyle. My hair has always been short. I’m a little bored of it now. It’s not a concept, but I would like to change that. Maybe have long hair like with extensions or a wig. I don’t want to change my image too much though.I think I’d like to incorporate the concept of water, something like the texture or sound of water in our next video. But, I can’t swim so that’s a problem. [laughs] I’m so scared. I can’t open my eyes underwater. [laughs]

K: I think it’s natural not to be able to do it.

APA: Would you learn how to swim for the video?

APA: Actually, you could get inside your huge LED ball and just walk on water.

K: That’s a great idea! Maybe I should do that.

APA: Please give us credit for the idea if you do!! [laughs]

K: Yes, I’ll talk about it with the others [laughs] 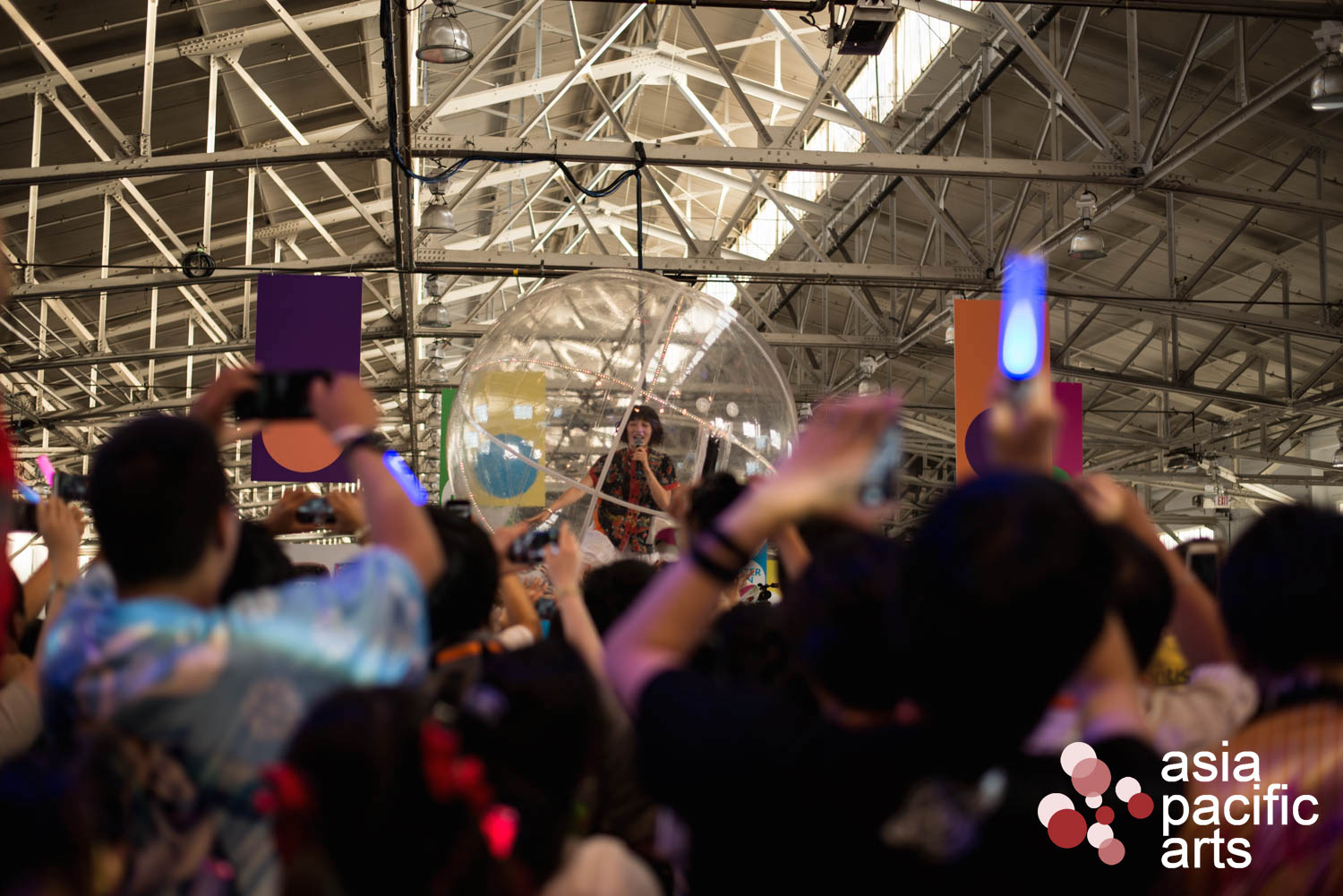 APA: You mentioned that you’re working on your upcoming album now. Any ideas on what kind of music you might include?

K: I want to include like different countries and cultures in our new album. Like more of an African sound and maybe really high BPM.

APA: Since you traveled around to perform recently, did you pick up on any culture that you want to incorporate into your music?

K: In Japan, I think it’s a bit stressful and feels confined. Before the Edo period, Japanese people used to be more free-spirited, but now it feels very uptight. I feel that living in America is more suitable to me because there’s this sense of freedom. I want to change and become more free and open and dance more. I would like to bring more of that feeling into our music.

Check out our photos from her performance below!