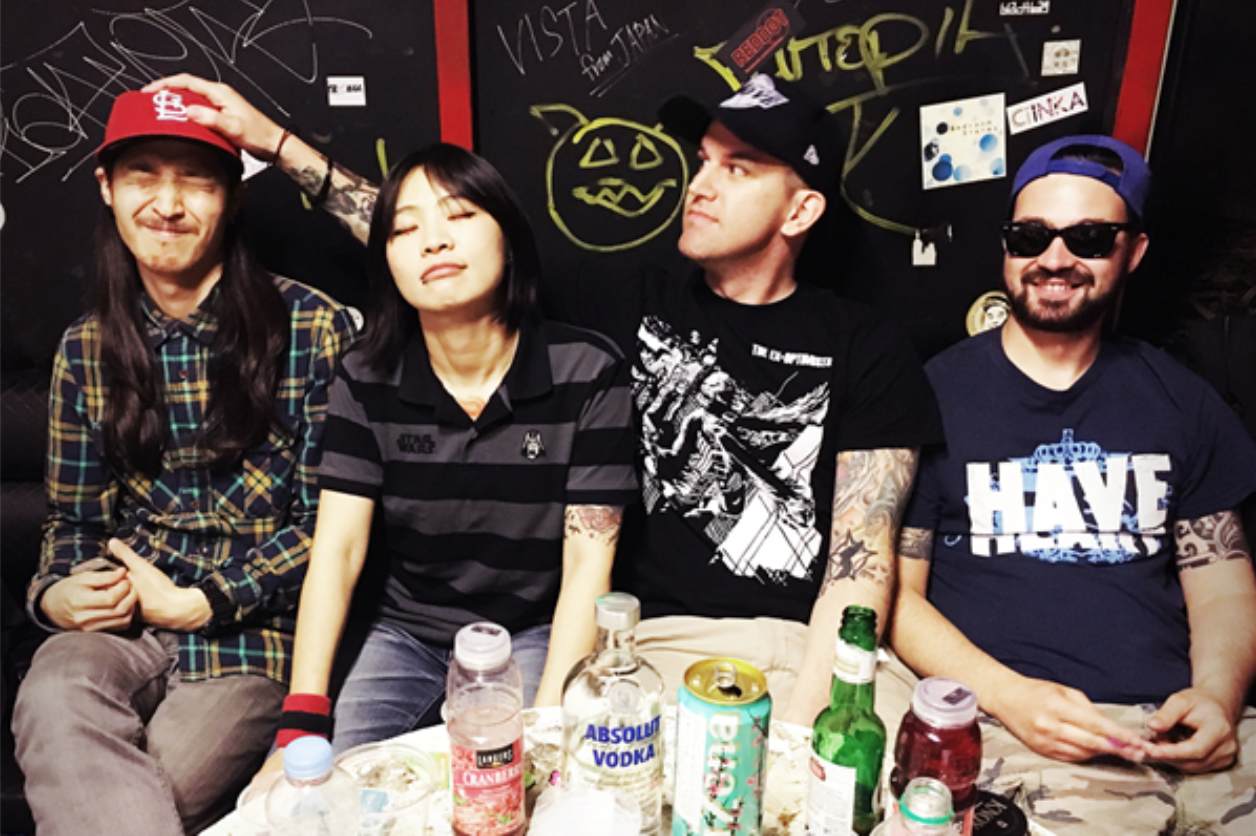 APA: Can you please introduce your band, each member and a random fact about each of you?

We are …Whatever That Means, a melodic punk band from Seoul, Korea. I’m Jeff. I play guitar and sing. A random fact? Well, last Halloween, I got blackout drunk on peppermint schnapps and decided to stagedive a lot. One time, nobody caught me and I landed hard on the concrete floor. I really messed up myhip and back and couldn’t walk for almost three days.

Trash, is our bassist. She sings backup a lot and lead vocals sometimes. Trash and I are married and we have two cats that Trash loves way, way, way too much. When they die, she wants to get them stuffed and keep them in our house. Weird, right?

Bialy plays lead guitar and has just started doing backing vocals. When we met Bialy, he had really long dreadlocks. He cut them off a few years ago, but he still has them in a jar in his freezer.

Daewon is our drummer. The most interesting thing about Daewon is that none of us remember how he ended up in our band. We were looking for a new drummer for a while, and now he’s been in the band for over a year, but nobody remembers how we were introduced to each other or him auditioning.

APA: How did you come up with your band name?

Trash and I had a big punk rock show in Seoul for the after party of our wedding reception. At that point, she was still playing in her old band, BB Lucky Town, and I hadn’t formed my own band in Korea yet. I was determined to put something together for the show. Unfortunately when my buddy was making the poster, I didn’t know what that would be, so he just listed all the bands and at the bottom wrote, “and Jeff….whatever that means.” Once we had a lineup together for that show, we decided to call ourselves “…Whatever That Means” so we could pretend our name was on the poster.

APA: If you could describe your musical style in three words, what would they be?

APA: The group is comprised of members with diverse backgrounds, coming from Korea, America and Poland. Do any of your cultural backgrounds play into your music?

No, our different cultural backgrounds don’t impact our music at all. That’s what makes music such agreat equalizer. We may have grown up in different countries and cultures, but we all call the same city home now, and we all have a very similar vision for our band.

APA: How would you describe your group dynamic?

Hmm … I’m going to say “mutually assured destruction.” We’re all very stubborn and opinionated.Sometimes it can be very frustrating, but it’s hard to get too mad at any one member because we’ve allhad those moments where we’re just kind of unreasonable.

APA: As a group, how do you write your songs together? Where does your inspiration come from?

I have written the demos and lyrics for all of our songs up to this point. I never actually decide to sit down and write a song. Usually, it’s just a little riff or piece of melody that comes to me, and I kind of build it in my head while I’m driving around Seoul. Eventually, I record a rough demo and send it out toeveryone. I’ll usually give them an idea of how I envision their part of the song, but then they run with it and always make it way better than I originally heard it in my head. Then it’s just a matter of running through it all over and over at practice until we like the final product.

APA: As a band based in Seoul primarily releasing English-language music, what is that like in a countrywhere most local listeners don’t understand English?

A lot of Koreans who are involved in or support the punk scene can speak conversational English. If you listen to some underground Korean bands, you’ll see that a lot of them also sing in English. It’s never really a problem. Lyrics are a really important part of our music though, so we always make sure to include translations in album liner notes and subtitles with music videos to make sure people really understand all of what we’re saying. When we first released the song “Sixty-Eight, Twenty-Two,” it was a big hit at shows because it’s a good sing-along song. Then we released the music video with subtitles and the reaction was amazing. A lot of people finally understood the whole meaning and really related to it a lot more.

APA: You’ve recently released your split 7-inch record with Seattle band Burn Burn Burn. How did you come to know the band and decide to release a record with them?

We met Drew, Burn’s singer, on our first American tour back in 2011. We played at a place in Tacoma, Washington called Nemesis House that he helped run. We’ve stayed in touch over the years and talked about releasing something together a few times. Once we decided to come back to the States this summer, it made perfect sense to release an album together now.

APA: You’ve also recently released a short music video for the song “I Can’t Take It” which is featured onthe 7-inch split record. The video is a fun stop-motion video starring Skeletor spending each of his days constantly agitated. Where did the idea for this music video come from (and how difficult was it to cast He-Man and a Ninja Turtle)?

The song’s lyrics are really simple and repetitive. “I can’t take it anymore. I just can’t take it anymore. Every day, it’s all the same. You wake up to hate life and go back to sleep.” That’s it. Over and over. It was inspired by all the people I see who wake up, spend their entire day at work, get drunk at night, and then repeat the whole process all over again. They’re not satisfied but aren’t willing to do anything or take any risks to break the cycle. The original idea for the video was to show someone going through that cycle over and over and just slowly speed up the video as it repeated. Then, it just kind of occurred to us that it’d be funnier as an animation. And who better to be dissatisfied with life than Skeletor? As far as casting goes, do you have any idea how hard it is to find reasonably priced vintage toys thesedays? Ouch! That was definitely challenging.

APA: As you’re currently on your West Coast tour, what’s on your to-do list while you’re performing in the States?

We have a pretty limited timeline for tour and have a lot of far apart places we want to hit, so there’s not a lot of time for sightseeing in the schedule. We’re going to be seeing and staying with a few old friends from Korea who we haven’t seen in years, and we’re looking forward to catching up with old friends we met during our US tour in 2011. Most of all, I can’t wait to finally see Burn Burn Burn live! We’ve been friends for years, and I’ve seen lots of stuff online, but never live. We’re playing two shows with them, so that’s going to be pretty great. 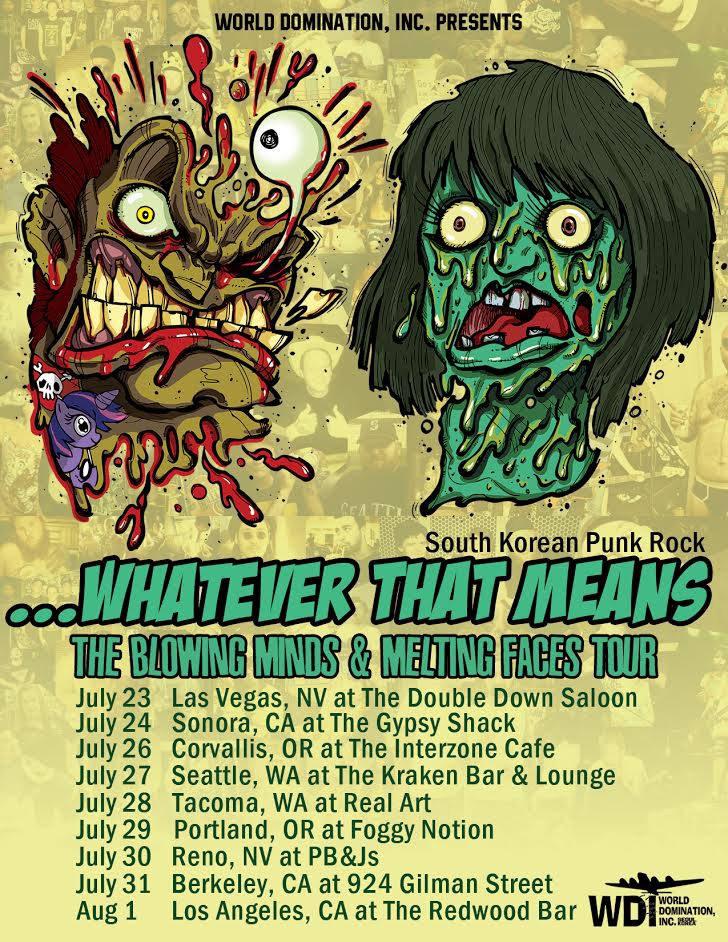