Pop rock is one thing, but the fusion of Japanese idol pop music and heavy metal is an entirely different beast. With two genres of music seemingly at the opposite ends of the spectrum, it’s a bizarre, yet delightful surprise to find that BABYMETAL succeeds at combining the two together. The three members of BABYMETAL are cute teenage girls with their tied hair and puffy tutu dresses, but on stage, they combine their strong, clear pop vocals with intense heavy metal that creates this monstrous energy, invigorating the mesmerized crowd. Traveling on their third world tour, Legend – Metal Resistance, BABYMETAL expands the North America leg and visits San Francisco for the first time.

After a dramatic narration to set the mood, the girls make their grand entrance with “BABYMETAL DEATH.” The song begins with a haunting Gregorian chant-esque melody that immediately moves into high energy drumming and wild strumming of guitars. To see such cute girls on stage delivering sharp moves and commanding poses with serious and dark looks on their faces to metal music feels completely jarring, but once you get over that shock, it’s hard not to get into it. (After a bit of research post-show) the only disappointment is that they didn’t perform the song with their legendary live crucifixion sequence. Because no doubt, the crowd absolutely worships BABYMETAL. 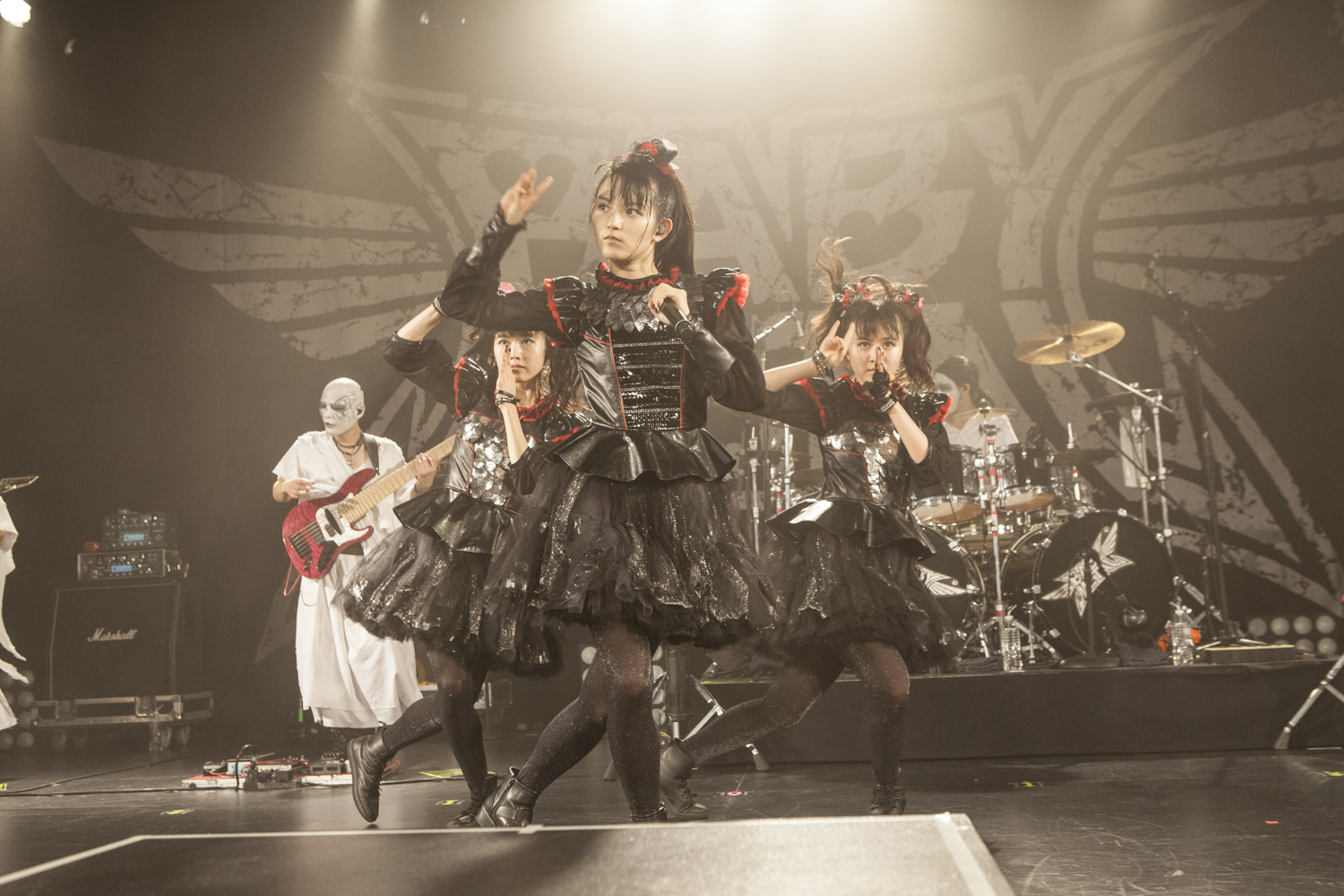 Unlike when other Asian pop acts perform in the US, the venue is packed with metal fans, ready to get wrecked. In the pit, the moshing commenced immediately with bodies slamming against each other frantically to the high energy music. The girls have complete control over the cult-like crowd, as the enthusiastic audience eagerly complies to each command lead vocalist Su-Metal bellows. Jump? Okay. Make a bigger circle for more moshing? You got it, overlord Su-Metal.

Although the trio of BABYMETAL is at the forefront leading the show, credit needs to be given where it’s due, to four-piece band KAMI BAND who are also key to making the show wildly enjoyable. The band is dressed in classic heavy makeup metal with faces painted white and intense black eye makeup, looking like white grim reapers. The band puts on an impressive and energetic performance, wilding out on their instruments with their tongues wagging.

Having recently released their second full-length album “METAL RESISTANCE” in April, the concert featured music from their entire discography with hot tracks like “GIMME CHOCOLATE” and “KARATE.” As the group’s music is a fusion of two very different genres, the concert constantly oscillates between music that is heavier on the pop side and on the metal side. BABYMETAL’s charm and strength is because they bridge these two distant musical worlds together and can appeal to a greater audience because of their musical versatility.

There’s a pretty distinct image of what metal should look and sound like with words like intense, aggressive, overwhelming and badass coming to mind. After witnessing one show, it’s clear that BABYMETAL delivers all that and more. Nothing says badass more than a group of teen girls destroying conventions by effectively confusing and bewitching listeners with an unexpectedly addictive hybrid of music, all with a side of cuteness.