Coming to AMC on November 15 is the network’s newest sci-fi/martial arts series Into the Badlands. The show follows a lethal warrior played by Daniel Wu who discovers a young boy with hidden powers and they embark on a dangerous journey together. Initially, Daniel Wu was brought onto Into the Badlands as an executive producer to bring his Hong Kong martial arts expertise to the show, but later found himself landing the leading role as well.

Daniel Wu chats with us on balancing both his roles as executive producer and lead actor in Into the Badlands, as well as the intense fight camp made to prepare the cast for the rigorous combat in the show. 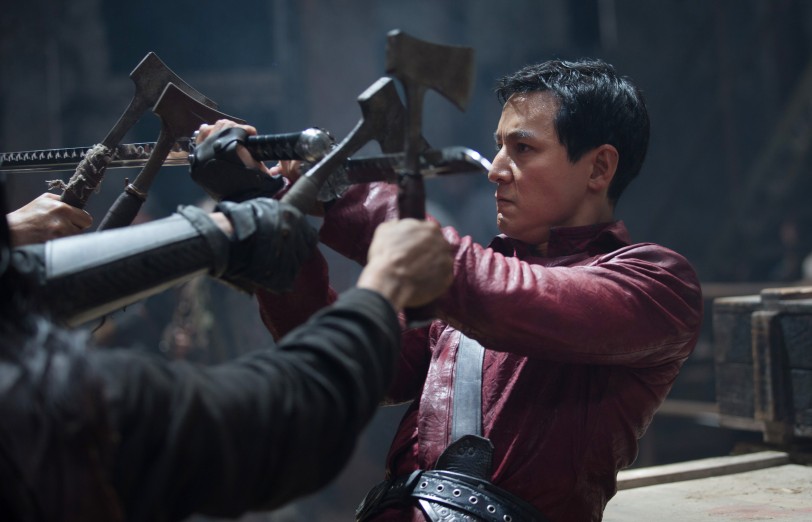 You started off as an executive producer of the show, but what attracted you to the role?

I knew that putting an Asian in the martial arts genre is very stereotype, but I wanted to see what the character was like. What we’re seeing here is a strong Asian male lead who has a girl and who isn’t just part of a team, but is leading the whole story. It’s something that we haven’t seen before. Yes, he’s stoic at first, but later he opens up and you can can see his emotional side. It started with a stereotype and kind of blossomed into something else and that’s what really attracted me to the role. We weren’t consciously trying to change the phase of Hollywood by creating more diverse roles for Asians specifically, but it just happened to be that way because the team I work with are less close-minded than other executives in Hollywood.

As both executive producer and leading role, how is it balancing those two roles?

It was very, very challenging. I can say our days are 12 to 16 hours long. I had a trailer that I got into in the morning to get dressed and once I was on set, I never left set all day long. So if I’m not shooting, I’m doing some kind of problem solving/producing. There’s either something that’s happening right there on set or something that we’re preparing for the next fight. It was very, very busy. There wasn’t much time to rest. If I’m not fighting, it’s like a 10 minute break before I have to work on some other issue. It’s intense, but I’m glad this happened to me at this point of my life. If I was in my 20s or 30s trying to play two roles like this at once, that would probably make me crazy. After gaining enough experience in producing and acting in my career, I was able to find that balance. It was still mad, but we were able to do it.

You brought along Stephen Fung to join the show as an executive producer, but he also gained an extra role like you and became the fight director. You have a long history working together and how did this all come about?

Yes, so a funny anecdote is that he was an actor in the first film I featured in, so I’ve known him my entire acting career. My first film was a gay one and our first onscreen kiss was with each other. That’s a little fun fact for everyone. And now 20 years later, we’re making like extremely violent bro films together. We’ve been great friends for a long time. We started acting pretty much at the same time and have worked on several projects together like Gen X Cops. On the side, Stephen was always shooting these little short films on a DV camera and I tried to participate in them too. At that time, I was like “Man, you’re really good at this stuff.” He was doing like in camera edits. He was really technically proficient and I really encouraged him to keep going with it.

When he directed his first film Enter the Phoenix, I was lead in his film. And since then, I was in every film that we’ve done subsequently. We have not only a great working relationship, but a great personal one too. We can do everything in shorthand and don’t need to explain anything to each other. So, when Into the Badlands came along and Stacy Sharon invited me to participate, I immediately thought of Stephen. I knew he would be perfect for the show. At that time, I brought him on as an executive producer to brainstorm, but once things developed, it became clear he had to be the fight director because of his great directing skills.

I heard that the cast of the show had to go through an intense training camp. What was that like?

This was really challenging process. We were very adamant that the actors had to be good actors first. We could have gone to a martial artist with poor acting, but that would hurt the show. What we really wanted is to get the great: get the right actor and if they knew martial artists or were good athletes that was a bonus, but we knew we would have to train them. So, we had a 6-week fight camp where we trained and actually really all of our actors had zero experience. The key to making it all work was to teach them all the basics of martial arts, as you can’t make masters out of them within 6 weeks. We tried to find what they were naturally good at and exploit those things into the fight choreography.

Aramis (playing MK) is great because he’s young, athletic and game for anything. So, we just got him to try just a whole bunch of things and if he could do it, we put those into the fights. With Emily (playing The Widow), we try to use her grace to our advantage and incorporate that into the scenes, as she has dancing experience. So although very deadly, her style is very smooth and graceful. We created a stunt team, recruiting 5 guys from China and 4 from the States who could do the level of fighting we were looking for. It’s not easy to do 15 moves in a row, even if you are an accomplished stuntman. So, we had to get a martial artist stuntman who was experienced working in the Hong Kong style.

What kind of diet did you go through for the role?

It was crazy. I put on 18 pounds for the role because normally, I’m pretty slim built and I wanted to put on a bit of muscle for the role. I wish I did it in the past, but this required me to eat a lot. So, I ate about 6 meals a day prior to filming and then once we started filming, I ate 7 meals a day because of all the cardio I was doing, fighting in a leather trench coat in 90 degrees and 90% humidity in New Orleans. I mean, I love eating, but not to that level. Every 2 hours, people would bring me a full meal to eat, so I had to pack that down before getting back to a fight. It was grueling.

Sometime you just have to make do with what you have. We needed an extra pad for me to take a kick to the chest and we couldn’t find our bag of pads so we made one out of this ratty piece of foam and a plastic bag. #insideintothebadlands #intothebadlands #amc #amctv #martialarts #kungfu #kickass #kickingass #stunts #training #action #actiontime #conditioning #muaythai #kickboxing #boxing #fightingfit

We saw that you posted a photo on Instagram about using some ratty foam wrapped in a plastic bag to soften a kick to the chest. Care to share any other memorable moments from filming?

There are a lot. I think one of the funniest situations is in episode 6. I can’t reveal too much right now, but there’s this truck that appears in one of the scenes. It was borrowed from somebody like the set master’s friend and it was an old antique truck from the 70s that doesn’t really exist anymore. We’re told not to mess it up. But, a lot of the fight ended up happening on and around the truck. There’s a part where I get kicked into the truck and my butt actually made a huge dent in the hood of the truck. Then in another scene, I get thrown into the windshield and we cracked it. So in the end, we ended up destroying a truck that we weren’t supposed to destroy. [laughs]

And about that Instagram photo, I think what happened that day was that we couldn’t find the pad bag we normally have for pads. So, we just needed to get a really quick shot of me getting kicked in the chest. It wasn’t a super hard kick, so I knew that piece of foam we found would be good enough to take the hit. There were a lot of situations where we kind of had to make do with what we had.